The state of Heraklion is located between two sierras, Idi on the west and Dikti on the east.  The valleys behind the city of Heraklion produce some of the best grapes that are used either comestibles, or for the production of raisins.  At those valleys the English archeologist Arthur Evans discovered the Minoan palace of Knossos, the ruins of a big civilization.  Some very important Minoan, Greek and Roman archeological sites are located there.  The biggest are Festos, Holly Trinity and Gortina.  The impressive tip of Psiloritis, 2.456 meters above sea level, is almost visible from all the places of the state of Heraklion.

Description of the city of Heraklion.

The modern Heraklion carries the tradition of one of the most attractive cities of the Mediterranean!  It satisfies and covers all tastes and the demands of the visitors.  It is not a coincidence that for ages was the center, the metropolis of Kriti and continues to holds the scepters, offering a lot of interesting activities and pleasant everyday life. The sightseeing at Heraklion are several, since the most ancient monuments and the first signs of the European civilization are here.

Mythology says that in the area of Heraklion, the god of hospitality, Zeus, got together with the gorgeous princess, Europe, who gave birth to the Minoan kings and wise men, the founders of the first civilized world in our continent.

Sightseeing at the city of Heraklion:

Venetian Walls. Heraklion is surrounded by its big Venetian walls that were protecting it from the enemies and highlighted the capital as the best fortified state in the Mediterranean.

Koules. The fortress at the port that for ages protected the state from the intruders but it also served as a prison.

The Martinego bastion is located at the south wall. Over there is buried the great Cretan writer of “Zorba” and the poet of “Odyssey” Nikos Kazantzakis, when a bit more south is located the old Gate- entrance of the city to the West Kriti, the well-known Hanioporta.

At the center of the city there are many monuments from the Cretan midlevel times that show its big flourishing during those years.  Ascending from the port, you see the first important monument Lontza that once was the Duke’s club and the officers of Kriti, decorated with sculpted blazons, trophies, with 82 metopes etc. It gathered during the centuries all the lords for their entertainment and their games, but for their formal ceremonies as well.

The Saint Marcus Basilica. South of Lotzia is the saint Marcus Basilica that was built in 1239 at the PLAZA DELLE BIADE (the square of the Grains) and it was the cathedral of Kriti.  It belonged to its Duke and at its area the Dukes were being buried. Today, Saint Marcus houses the Public Gallery of Heraklion.

The Public Gallery of Heraklion is saint housed at one of the most historical buildings of the city.  It is about the basilica of Saint Marcus At this place, various exhibitions and happenings are hosted occasionally but on regular basis (for now), Thomas Fanourakis, George Georgiadis, Lefteris Kanakakis and Aristodimos Papadakis exhibits are displayed.

“Liondaria”. At a few meters distance from the church, there is the ornate water fountain, known with the name “Liontaria” with the excellent sculpted decoration.  It was built during the first decades in the 17th century by Francisco Morozini, in order to decorate the square but to offer valuable water at the big city.

Medieval Monastery of Santa Ekaterina is located at a distance of 100 meters from the Liontaria water fountain and it was the Cretan university of the Middle Ages where many European artists were distinguished as well as philosophers, “church fathers”, poets and writers.  Today Agia Ekaterini houses a rich and important collection of paintings from the Cretan hagiography

The Archeological Museum of Kriti is located at Freedom square at the center of Heraklion, where thousands of visitors see the fabulous treasures of Minoan, ancient, classical, Hellenistic and the Roman times of Kriti.

The Historical Museum of Kriti, where the treasures of the Christian, Byzantine, Medieval and the Modern times of the Megalonisos. Artistic exhibits from the folk civilization of Kriti, some artwork from the great painter EL GRECO, who was born and studied painting at Heraklion as well as hagiographies from the famous Hagiography Cretan School. An original Cretan house and two rooms with personal belongings from the great writer Nikos Kazantzakis, are housed at the same museum too.

The Museum of Natural History is being housed at the building of the old Electric Company of Heraklion that is located at the Dermata cove.  It offers a unique experience to its guests.  At the exhibition rooms, that occupy 3500m, is highlighted with an impressive way the natural environment of Kriti in comparison to the one of the rest of Greece and the Eastern Mediterranean. There are four different levels at the exhibition building, the Megadioramata that are representations of mature in natural size. The Live Museum, with live animal’s characteristic from this era. The Research area, Erevnotopo, a room especially formed for kids where they can explore Kriti’s nature inside as well as the Egelado (earthquake) an experiential simulator of earthquakes where the visitor can feel real earthquakes that have happened at various places in the world.  At all the places of the museum, the visitor can look around or to be guided by the professional guides.

The Museum of the Kriti Battle and the National Resistance, a fairly small but significant museum in the city of Heraklion is this one of the Battle in Kriti. It is created to house an interesting collection that reminds the importance of the Kriti Battle, the significant Cretan peoples’ resistance against the invasion of the Hitler’s army during May of 1941.

Knossos. The Minoan Palace is the main area the visitors can walk around in Knossos, a very important city in ancient times, with continuous life from Neolithic years up until the 5th century A.D.  It is built at the hill of Kefala, with an easy access to the sea but as well as to the inland of Kriti.  According to tradition, there was the king Minus headquarters.  Amazing Myths, about the Labyrinth and the Minotaur and Dedalous with Ikaros, are related to the the Knossos palace. The first excavation took place in 1878 by the Heraklioti Minoa Kalokairino.  Later the excavations done by the English Sir Arthur Evans followed (1900-1913 and 1922-1930) when the entire palace was discovered.

Phaistos. The ruins from the city of Phaistos are located on a hill west of Mires on the way to Tymbaki.  The oldest palace of Festos (1900-1700 BC) was built on the ruins of the Neolithic and Protominoan era (3000-2000 BC).  This old palace, at which the basic characteristics of the old Minoan architecture are recognized (patios, polythira, front of buildings that have been taken care of, skylights etc.), has been destroyed and rebuilt twice.  After another later destruction around 1700BC its ruins got flatten and the newer palace was built on its ruins, whose life lasted up until about 1450 BC. Findings from the palace are being exhibited at the Museum of Heraklion, as the well-known Disk of Phaistos, the big collection of Kamaraika vessels with a variety of multy color decoration and many more.

Gortina. Οne of the most significant cities in Kriti. It has a history of 6000 years while it is one of the biggest archeological sites in Greece. It is located at the Mid- south part of Kriti, 40 minutes south of the city of Heraklion, on the way to Matala and Phaistos.  Its name, according to tradition, came from Gortina, who was the son of king Rathamnthy of Phaistos and brother of Minoa’s who established it. The area of Gortina was inhabited the last years in the Neolithic period and the Minoan years.  From the middle of the first thousand years BC. and on Cortina takes after Phaistos and dominates in Mesara, having as the center the acropolis with Athena’s sanctuary.  After the conquest of Kriti by the Romans, in 67BC. Cortina friendly adjacent to Rome, became the capital of Kriti replacing Knossos.

Agia Triada Heraklion Kriti as an archeological place, is located 3km west of the palace of Phaistos and was inhabited the 3rd millennium BC. It looks like it was destroyed as most of the palaces except Knossos during the Isterominoan period and was inhabited again becoming a significant area during the Metaanactoric period.  The big growth of this area is obvious from the ruins of the villa a very well kept number of rooms that was used as the summer palace of the kings of Phaistos.  The agora- settlement – graveyard.  The excavations at this area started in 1902 by Italian archeologists.

Matala. The small fishing village, about 70 km from the city of Heraklion, is well known as shelter of Hippies during the 70s.  The beach with fine sand and white flat rocks to protect it from the winds and the bright blue water make it very attractive. The small man made caves on one side and the fairly recent touristic growth on the other handcreat choices for every kind of traveler.

Kokkini Ammos. The red beach is located at a short distance from Matala. It took its name from the brown-red color of the sand that surrounds the beach. The sand is coming from the red rocks at the area.

Agia Pelagia. About 24 km North West of Heraklion is Agia Pelagia. The small, closed in bright green cove and the crystal clear water in conjunction with what the city has to offer are only a few of the reasons that it is worth to go and dive in there.

Malia. With the extraordinary, sandy beach. There, you will enjoy organization, sea sports and other benefits as hotels, restaurants and bars.

Agiofaraggo. Secluded beach, Agiofaraggo, on the south part of the state and very close to Matala is paved with pebbles, and with crystal clear water. To reach it, you must either hire a boat from the Red Tower (a small village 2km west of Tymbaki) or go down the gorge (it takes about 15-20 minutes.)

This port offers unlimited choice of excursions around the island. Choose from the palace of Knossos, the prestigious area of Elounda, Agios Nikolaos, the picturesque village of Archanes. The tours combine visits to local wineries, shopping and an acquaintance with the world famous Cretan cuisine. 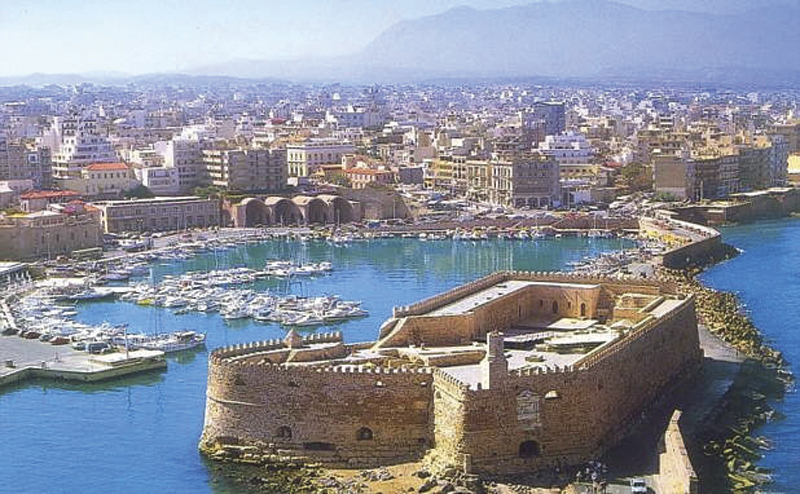 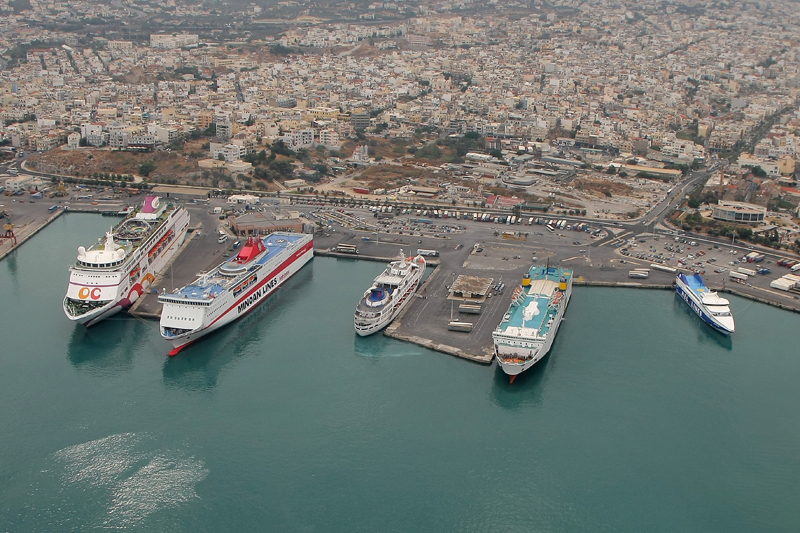 The port and part of the city

Cultural Events in the Municipality of Heraklion (Summer 2020) 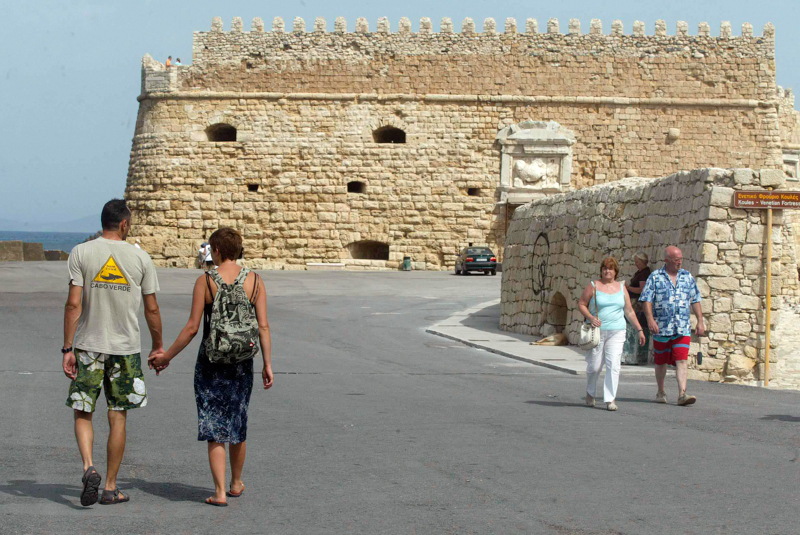 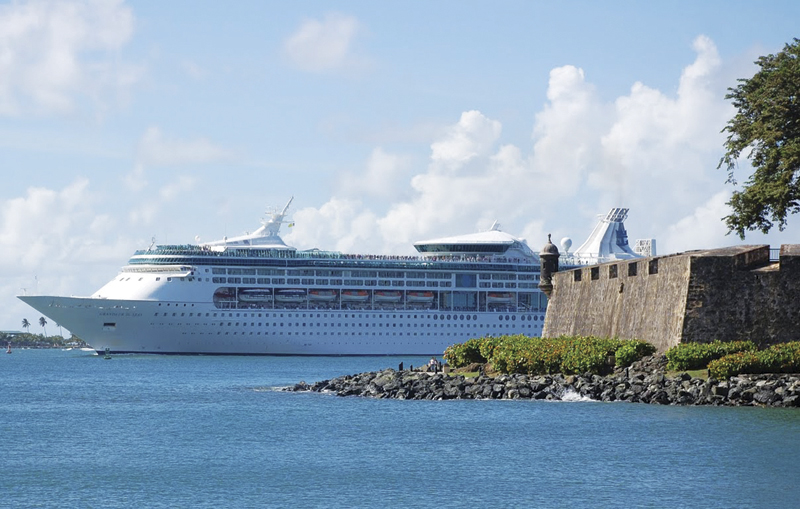 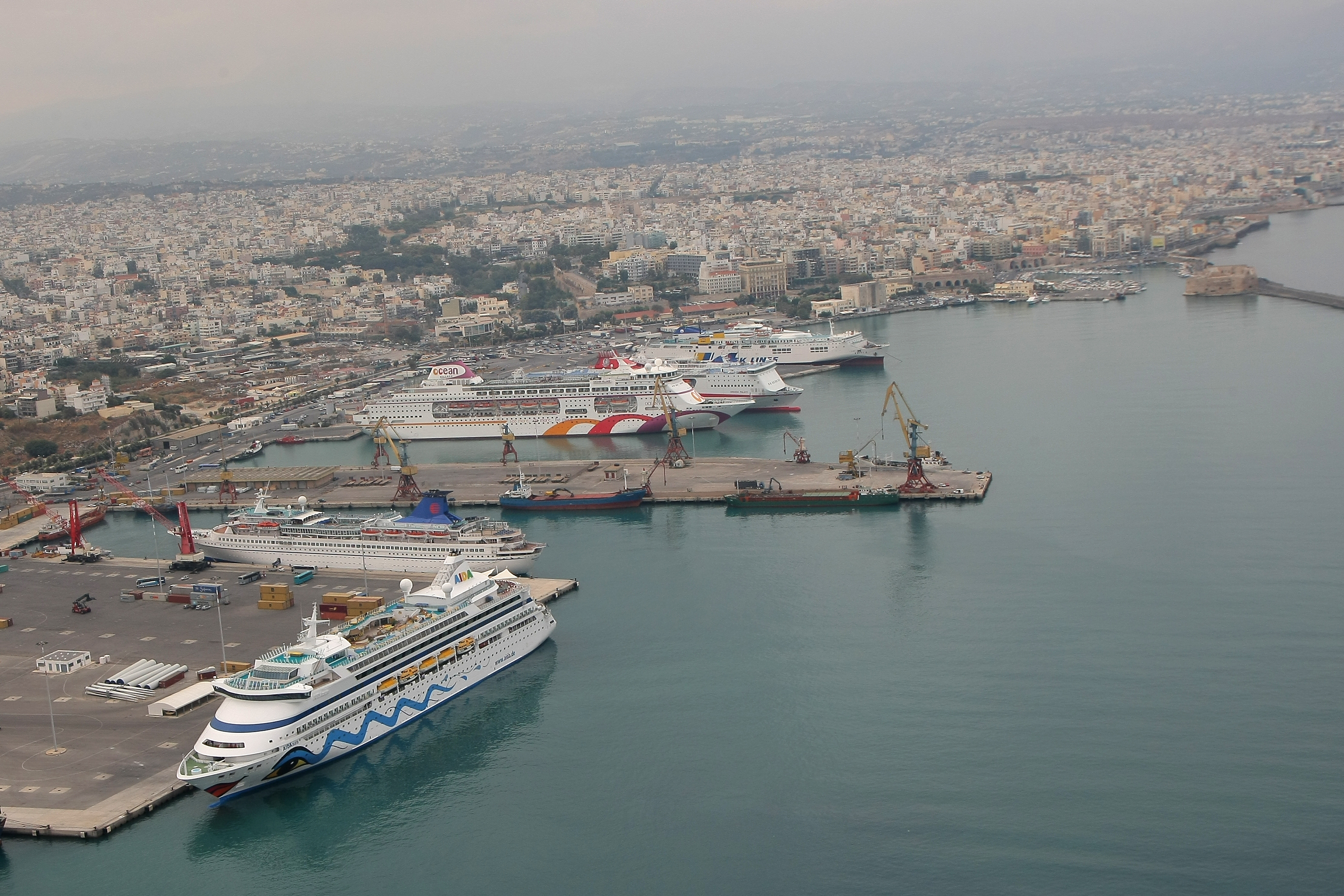 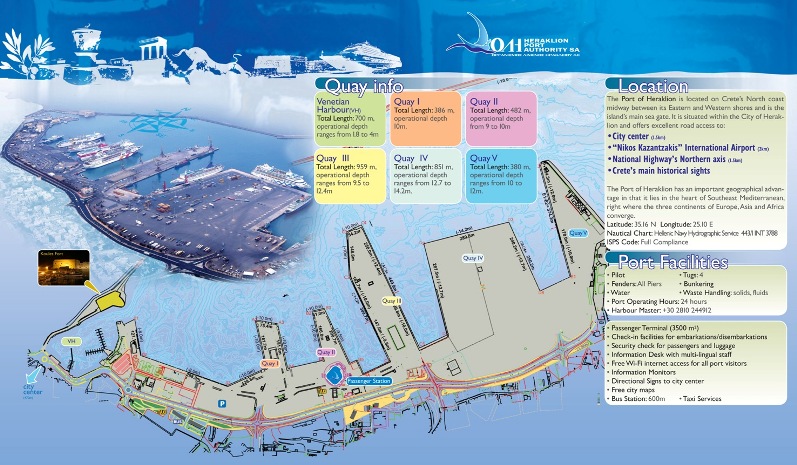 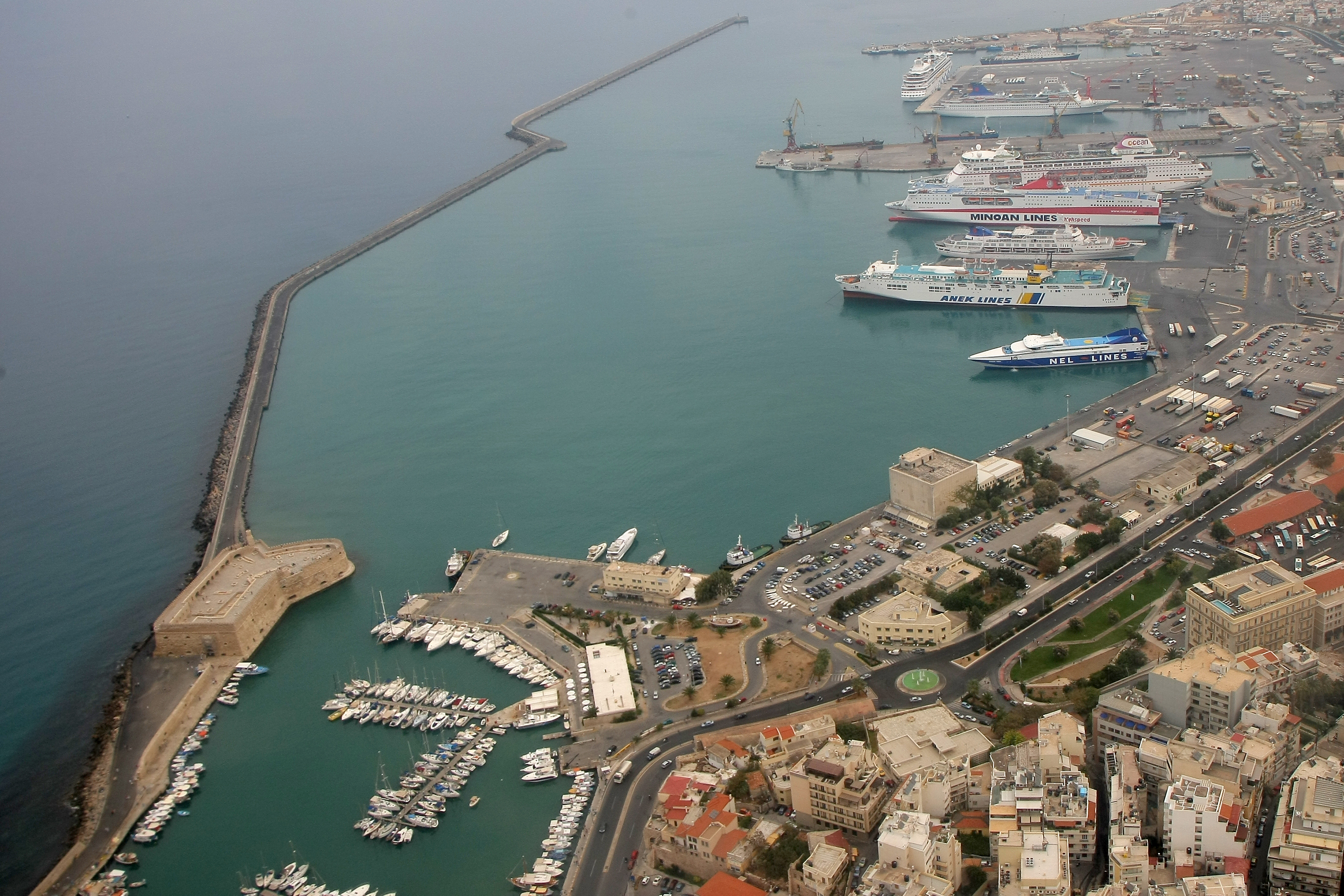 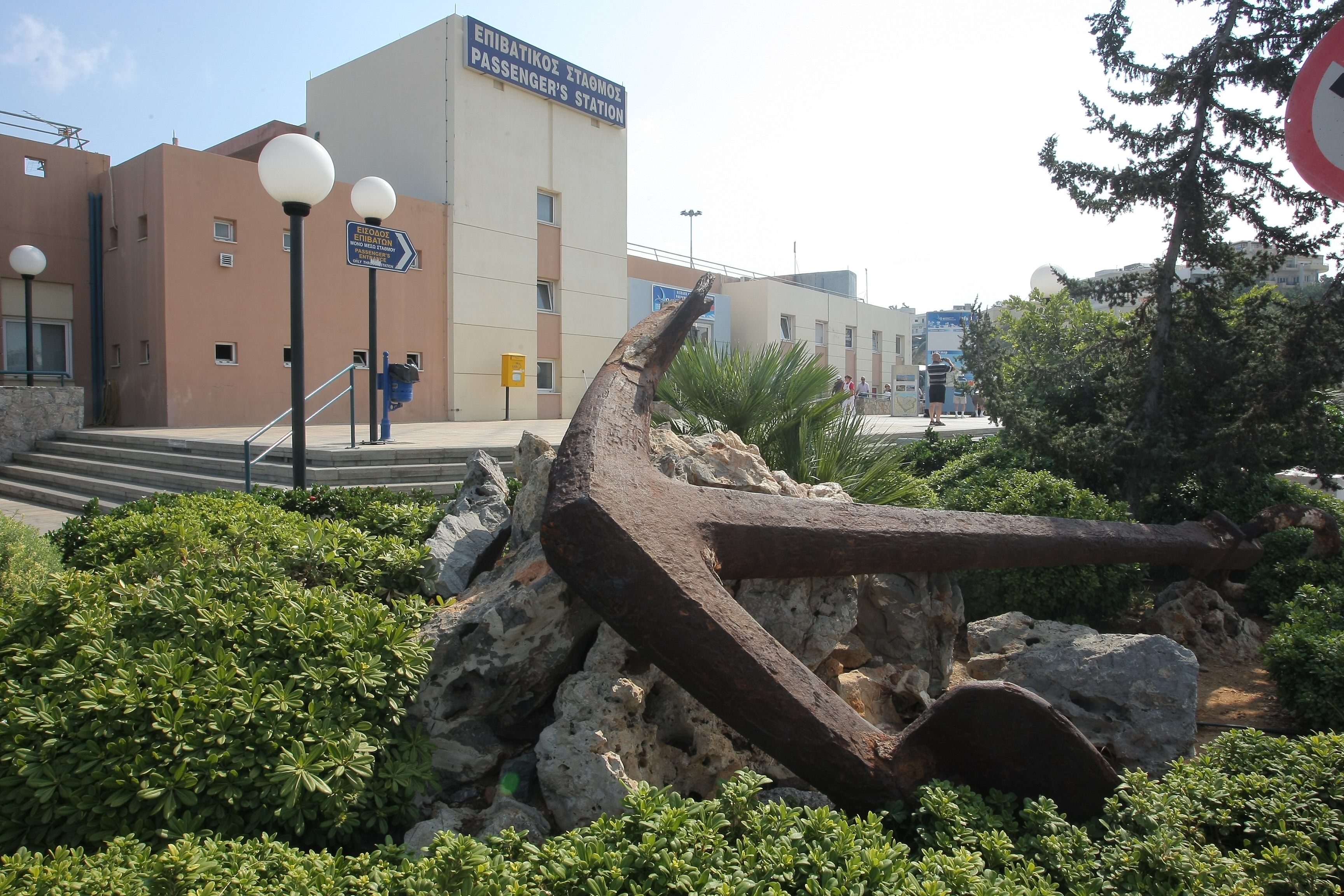 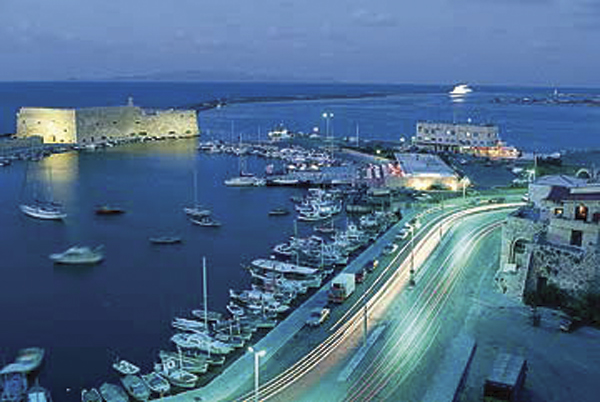 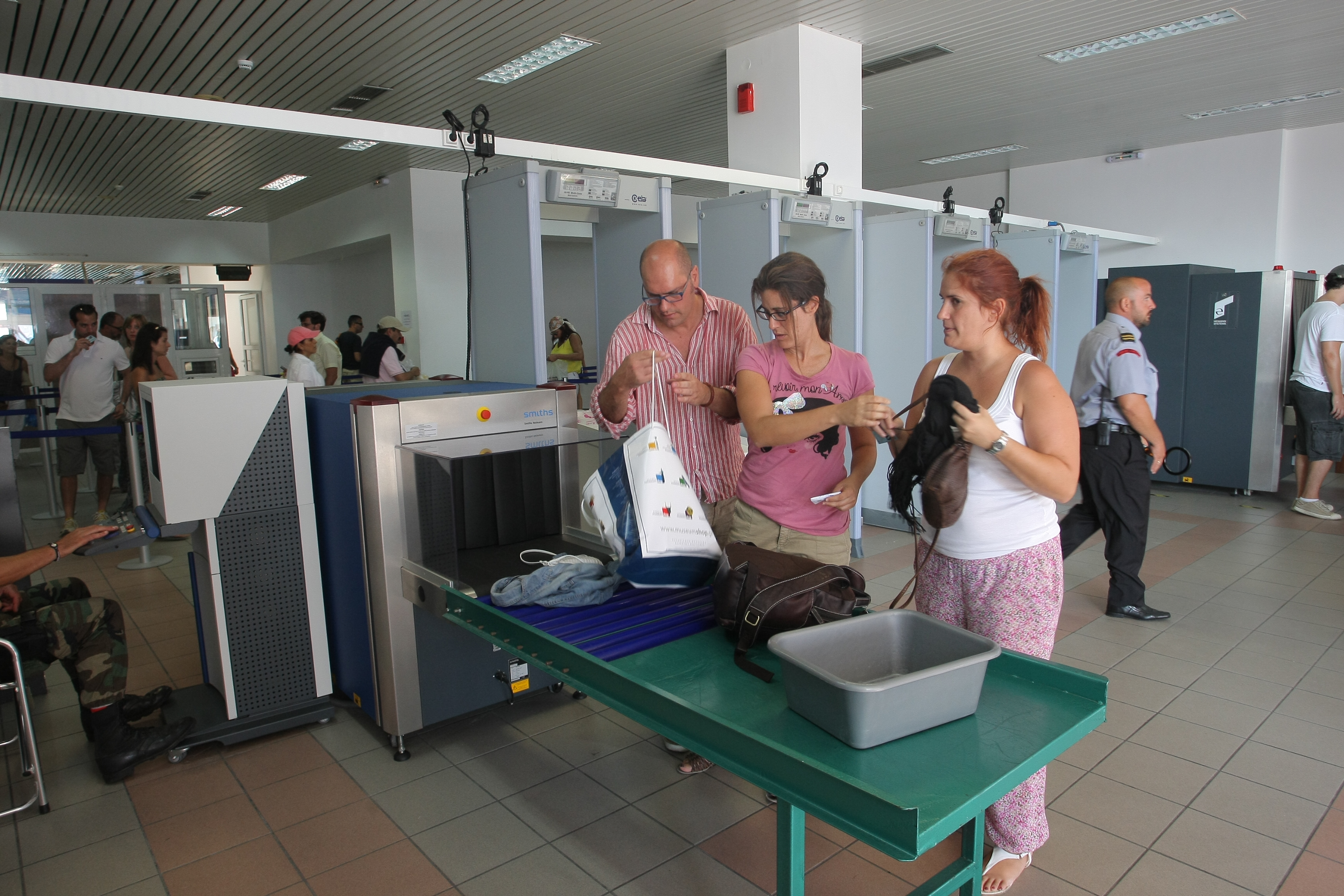 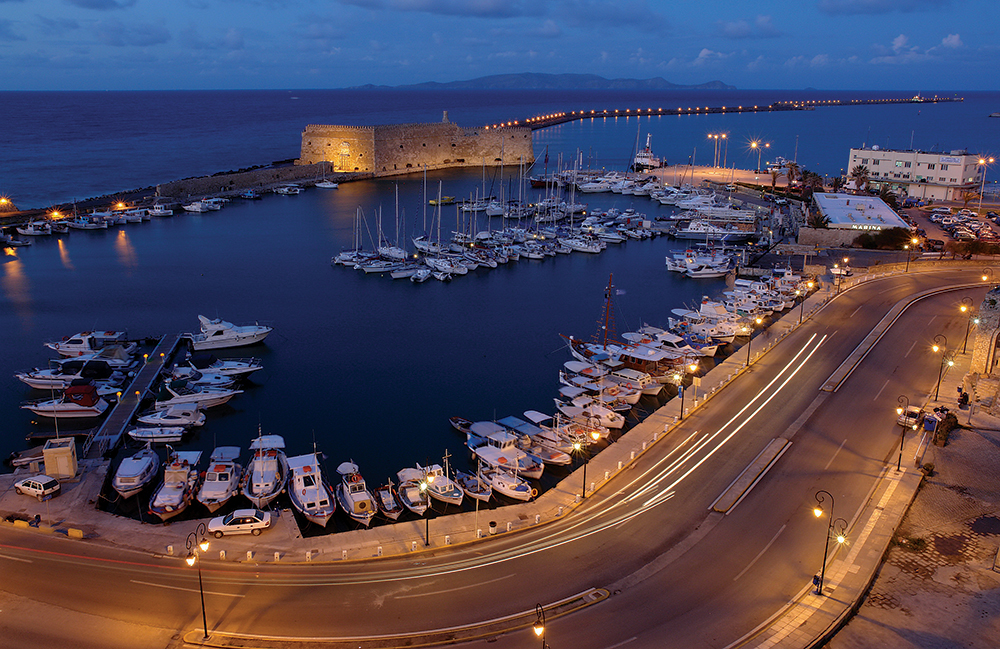 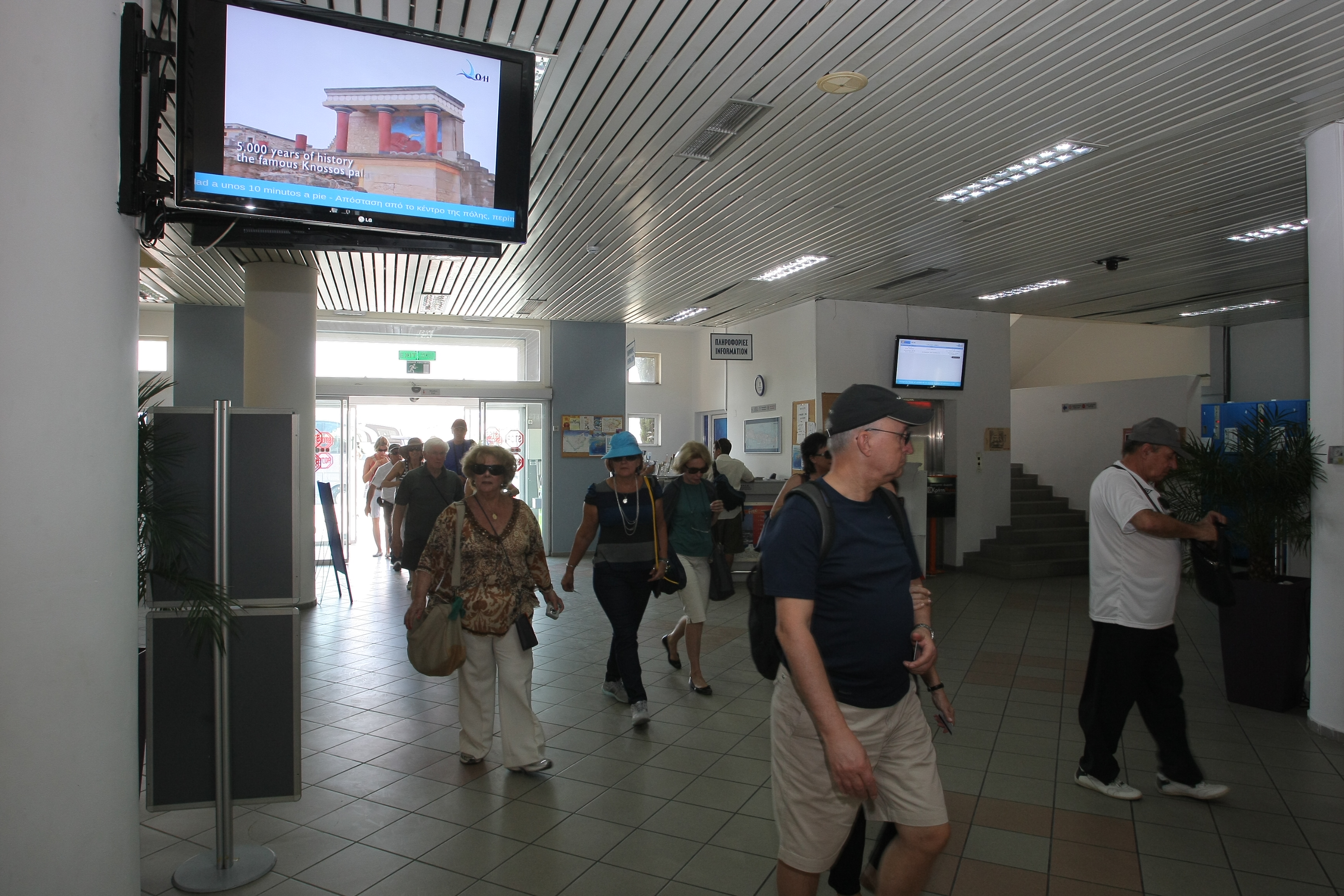 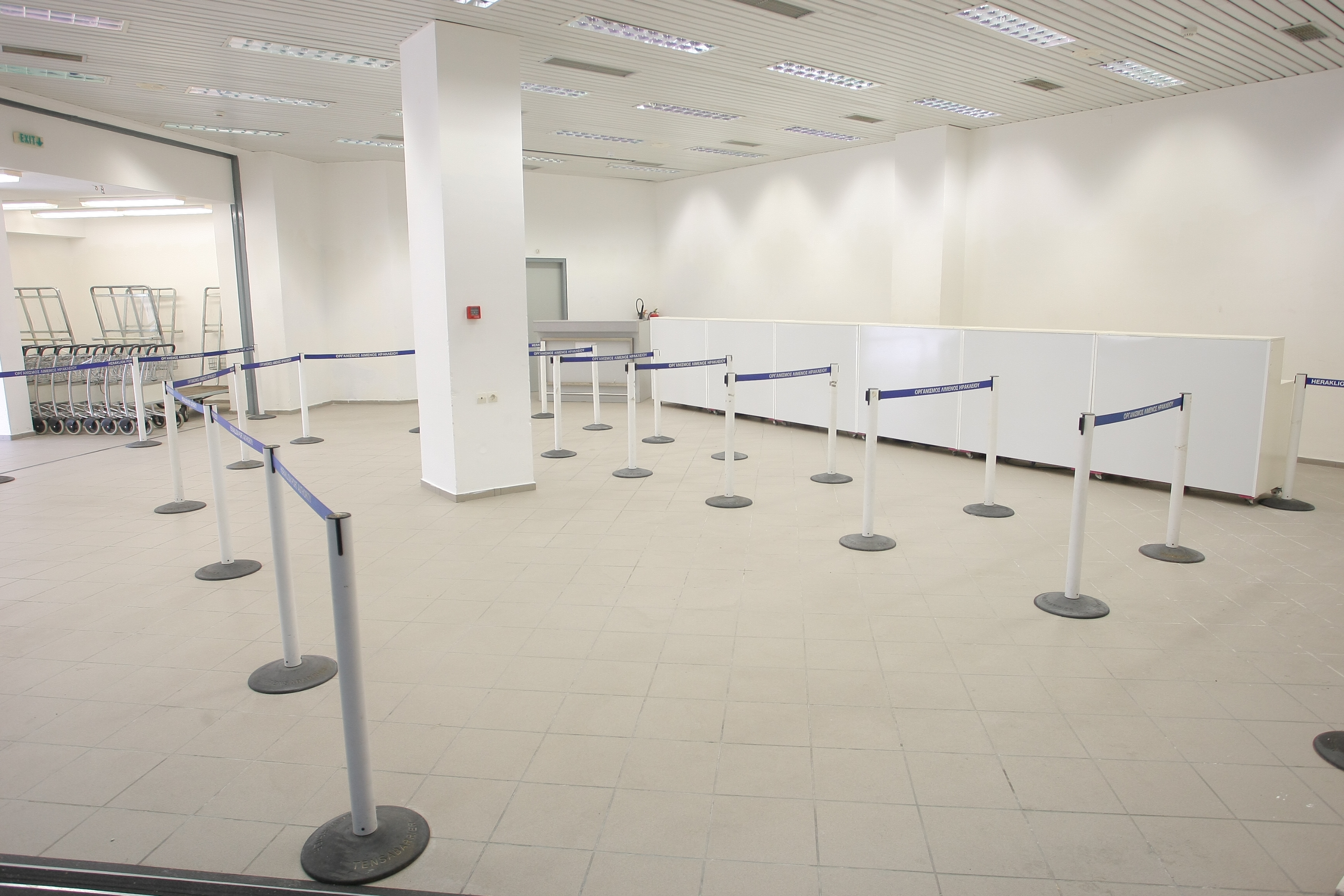