The first immigrant was said to Agkaios from Arkadia who participated at the Argonaut expedition. According to this tradition, the first immigrants at the island were Iones from the Epidaurus area, bringing with them the worshiping of goddess Hera.

Samos is the home of significant personalities of the ancient world such as the grate mathematician and philosopher Pythagoras, the philosopher Epicuros, and the astronomer and mathematician Aristarchos the founder of the heliocentric theory. Herodotus and Aesop lived for big periods of time at the island, while according to the mythology, Goddess Hera was born there.

The maritime tradition of Samos is known from the 8th century BC. When at the time, in the shipyards of the island the new type of ship with 50 oars, the famous Samaina, was constructed.

The maritime tradition of Samos is known from the 8th century BC. When at the time, in the shipyards of the island the new type of ship with 50 oars, the famous Samaina, was constructed. It was a big maritime and one of the most important trading centers in Aegean.  With very fast ships, the “Sameness’”, the trading of the famous wines and ceramics spread. The island flourished during the period (532 - 522). During the ancient times, the communication with the Ionian coast was taking place with the Eptastadio straight, since the distance is less than 1300m.

Samos is the closest to the Turkish coast, Greek island.

Vathi is the capital and the central port of the island.  The city of Samos is one of the most beautiful island towns, with the neoclassic buildings and old mansions.  The picturesque Vathi, connected with the city of Samos is built amphitheatrically around the cove of Vathi.

Hora is a traditional settlement with cable stone allies and the capital of Samos until 1854.

Pythagorion town is built on the ruins of ancient Samos, with its present port being the oldest artificial harbor of the Mediterranean, one of the island's "marvelous works" according to Herodotus, which has been declared a World Heritage Site by UNESCO.

Karlovassi is one of the largest cities in the Aegean with a port that accommodates passenger ships. There is a school of the Aegean University in the city. Impressive buildings such as the hegemonic mansion, the Hatzigian Library, the Commercial School, the churches and many neoclassical buildings testify to its history and rich cultural tradition.

The Building of Samos Parliament, which currently houses the Town Hall and the Municipal Art Gallery, is one of the most beautiful buildings on the island. The Gallery contains historical relics of the island from the year 1821 until the modern times, amongst others, Samos’ constitution is exposed.

Archaeological Museum of Vathi in Samos. The exhibits are housed in two buildings: The Old Museum (“Paschaleion archives”), built in 1912 and the new Museum which was inaugurated in 1987. It contains the following collections: Archaic Sculpture, Pottery, Bronzes, Wooden items, Clay figurines, Small objects as well as a statue of ‘Kouros”, one of the largest in Greece.

Archeological Museum of Pythagorion, is located in the center of the ancient city and It hosts about 3.000 exhibits, mostly finds from the Pythagorion area, classified thematically and chronologically. It presents aspects of the historical and cultural development of ancient Samos from the Neolithic era to late antiquity. It illustrates the important position the island held in Greece and illuminates aspects of the historical and cultural evolution of ancient Samos.

The Tower of Lykourgos Logothetis is located southwest of the port of Pythagorio, includes parts of the Byzantine castle that was abandoned in the mid-15th century. The leader of the Samian revolution, Lykourgos Logothetis, fortified it again and converted one of the towers into a commanding post. Today, it is a restored Μuseum.

Folk Μuseums, reviving the traditional traditions of the island and depicting the image of the old times, are found at the Demetrios Foundation (Pythagorio), Karlovassi Samos, and other villages on the island.

Natural History Museum of the Aegean is located in the community of ‘’Mytilenioi’’. In the Paleontological section of the Museum the fossils housed in the showcases belong to animals that lived on the island, and especially in the Mytilenioi area, 8-10 million years ago.

Museum of Samos Wine is located in the city of Samos and it is housed in a 19th-century stone building. The Museum's exhibits showcase the entire historical, social and cultural path of Samian wine.

Efpalinio trench. It has been described as the "eighth miracle" of antiquity. It is dug into the bowels of mountain Kastro or Kastri and was the aqueduct of the city. It is 80m deep and 1046 m long, causing worldwide admiration because of its construction with the technical means of that period.  The order for the construction gave the tyrant Polycratis. Architecture and mechanic was the Megaritis architecture Efpalinos.

Heraion. At a distance of 7km from Pythagorion, the archaeological site of “Heraion” is located, where the homonymous temple is dedicated to the goddess Hera, declared as an UNESCO World Heritage Site.

The Polycrate walls, 6430 m. long, protected the ancient city of Samos and enclosed an area of 1.2 klm2. Their few surviving portions still today impress the visitors.

The Monastery of Panagia Vronda or Vrodiani or Kokkariani is located in the village of Vourliotes 21 km from the city of Samos. It was founded in 1566 and is the oldest Monastery in Samos. The architectural style of the church is basilica with dome The Monastery has an important collection of relics dating back to the 16th century.

The Monastery of Timios Stavros is located in the old capital, Chora. The majestic church was founded in 1592 and architecturally belongs to the type of three-aisled basilica with a dome. Features are the unique art carved iconostasis of the Catholic, decorated with scenes taken from the Old and the New Testament, the wooden carved and gilded pulpit and the Episcopal throne same technique.

Waterfalls at the river. Three kilometers outside Karlovasi, at the area of “potami” are the famous natural waterfalls of Samos. The waterfalls form two small lakes, perfect for the ones who want to swim at their gold waters.

Marathokampos is a picturesque village that combines mountain and sea and is 45 km from Samos. Near the village lies the cave of Pythagoras. The cave, where according to legend, the great mathematician Pythagoras fled to escape from Polycrates. At close distance lies another cave having inside the church of ‘’Panagia Sarantaskaliotissa’’. West of Marathokampos lies the ‘’Kakoperato cave’’ with magnificent stalactites and stalagmites.

Kokkari is one of the nicest fishing villages at the island, with a highly developed tourist infrastructure and it is 10 km from Samos. Its verdant mountains with springs are accessible from the village, through well-kept trails that are ideal for hiking. It is the departure point of hiking trails leading to Vourliotes, Mitilinii and the top of Mount Karvounis. 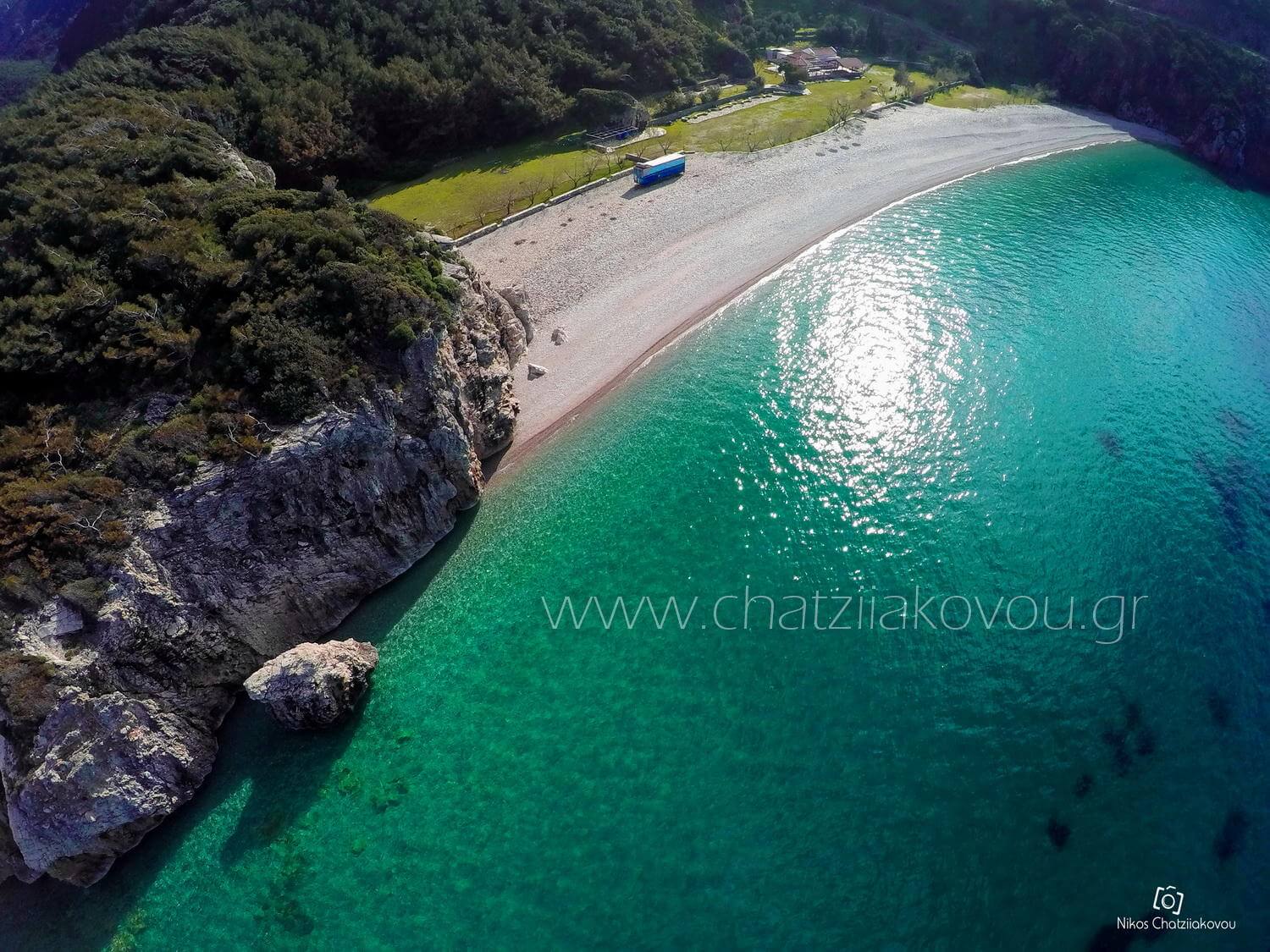 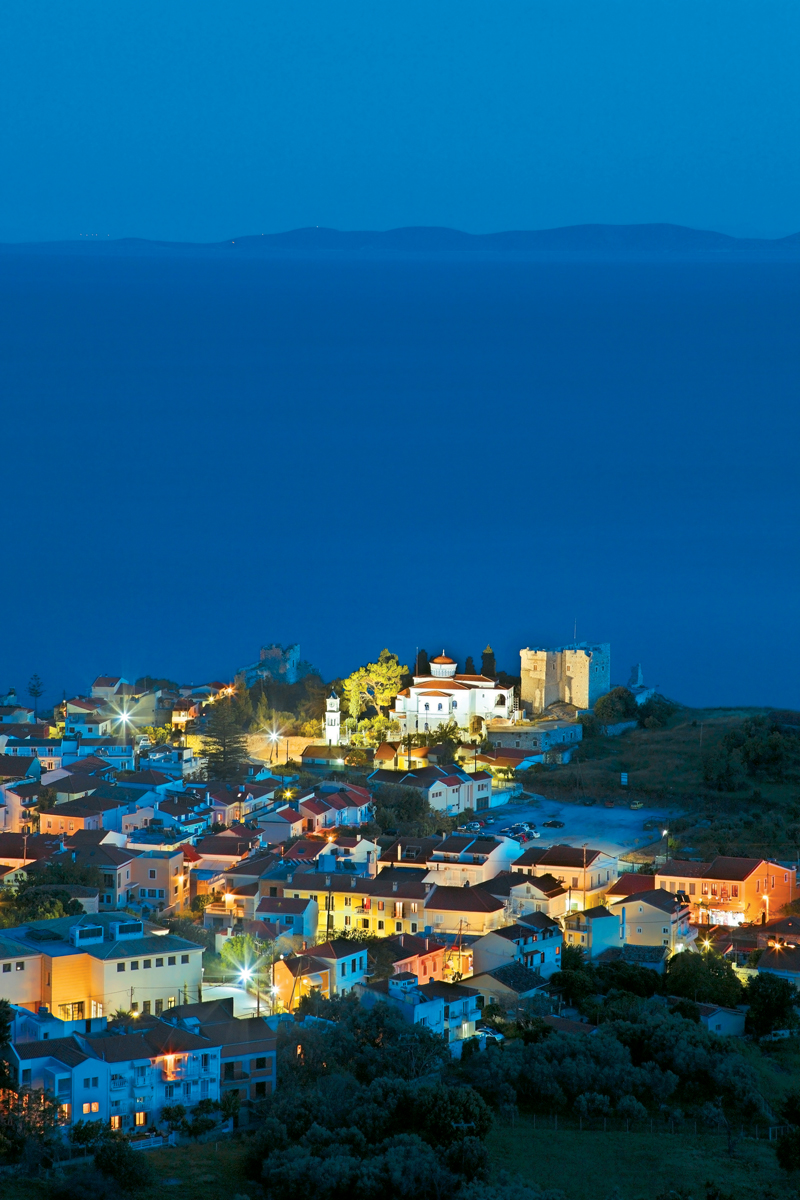 Cultural Events in the Municipality of Samos (Summer 2019) 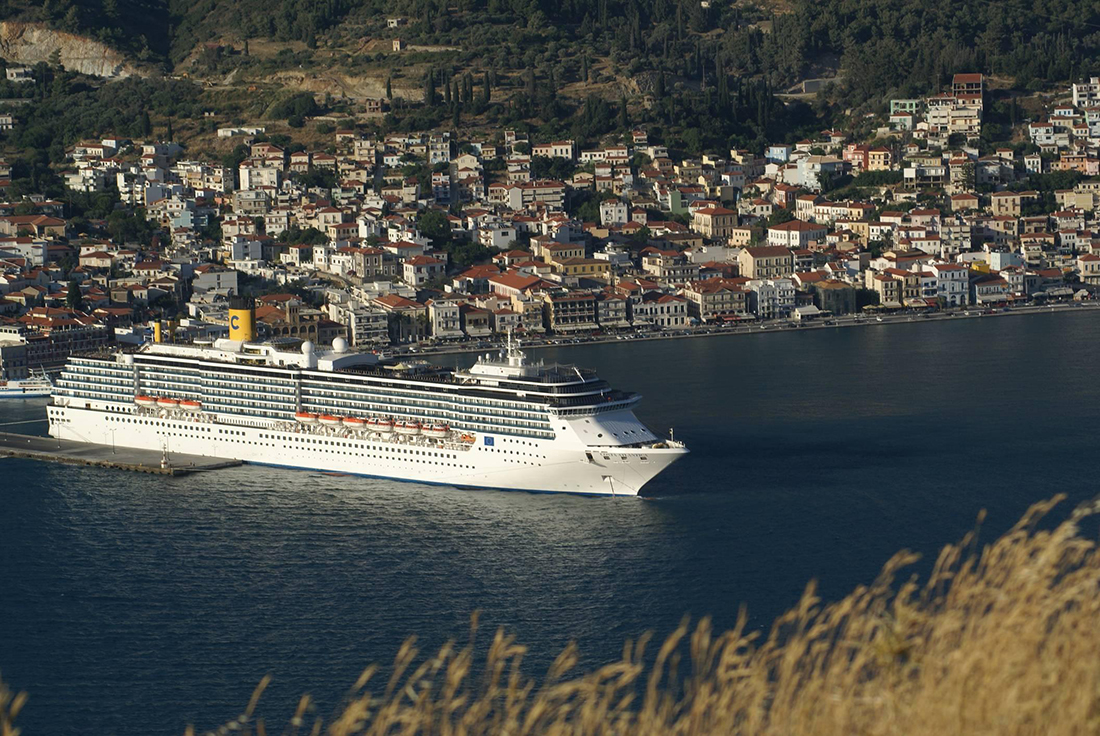 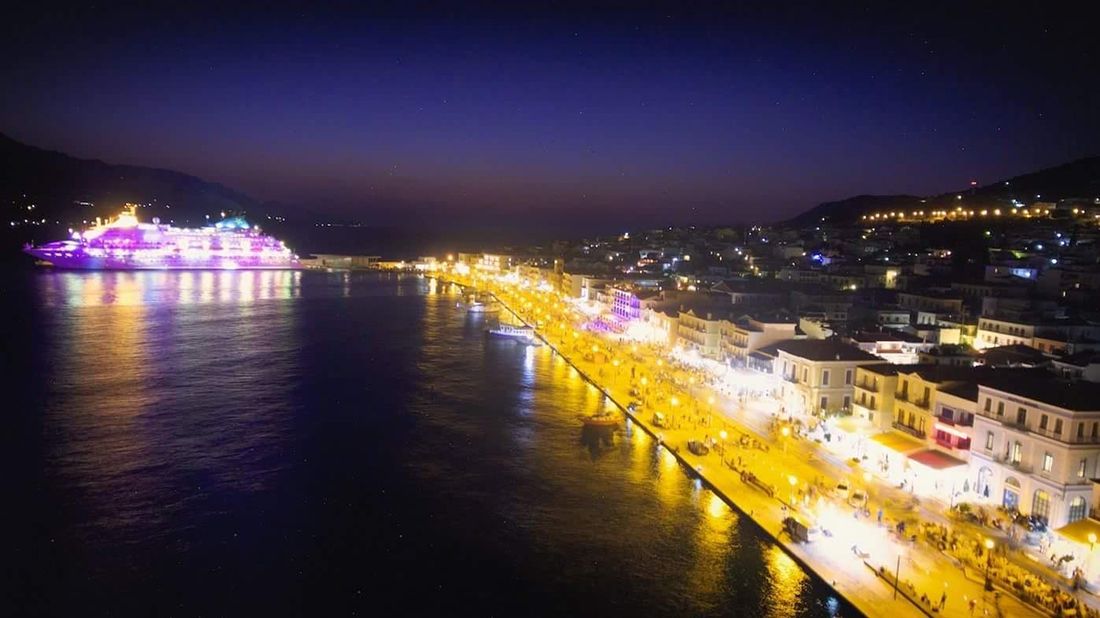 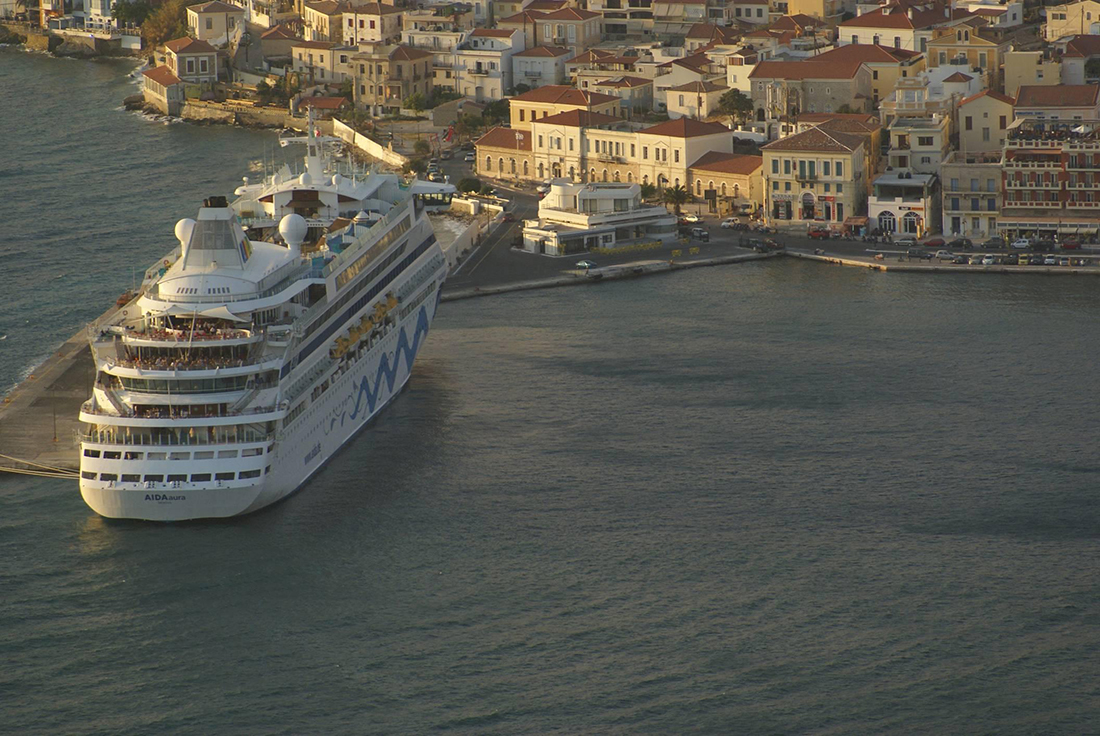 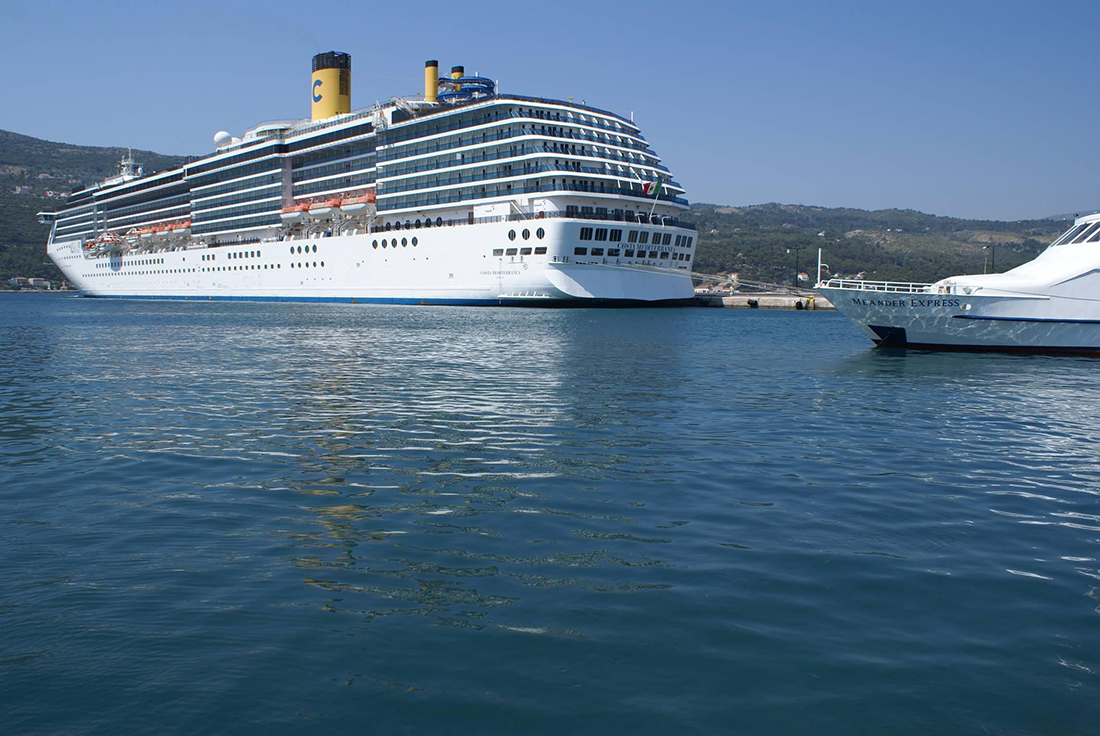 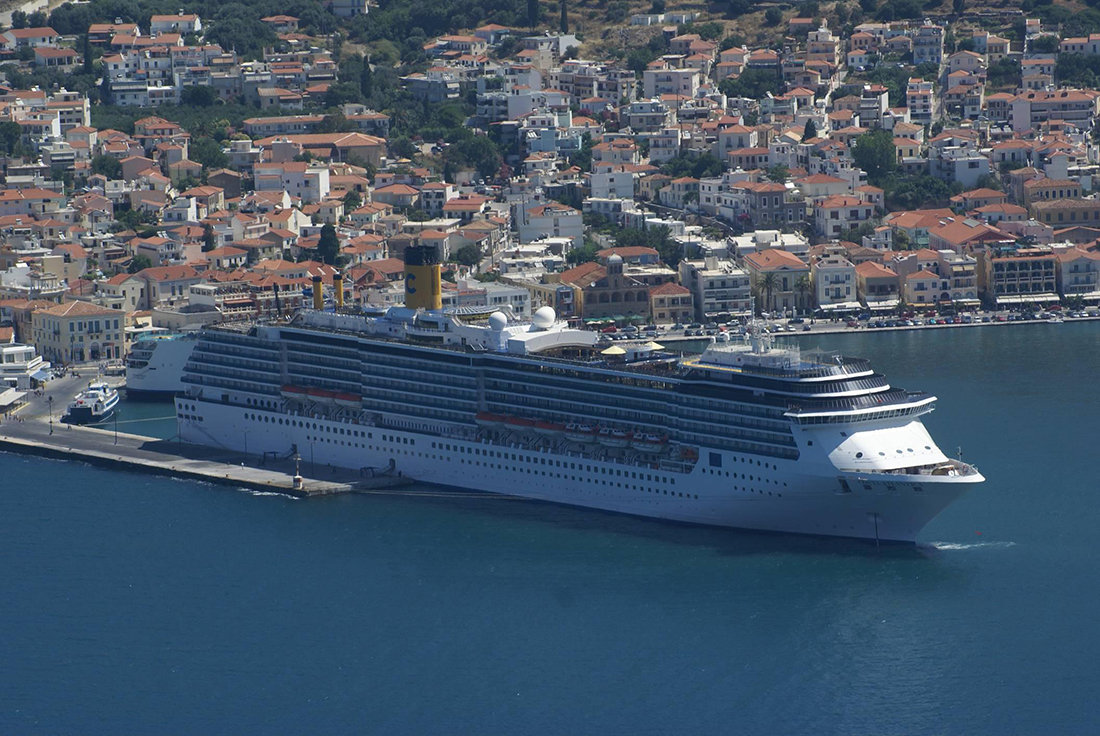