THE VARIOUS NAMES OF CORFU

Corcyra: (Doric dialect) the daughter of the Assopus river. The sea-god Poseidon, fell in love with her, abducted her, and brought her to this island, giving it her name.

Faikas: Τhe son of Poseidon and Corcyra, from whom come the name “the island of the Faikes” (also spelt Phaeceans).

Harpi - Drepani: translates as 'harp' and 'scythe' - names given to Corfu in ancient times due to its shape.

Scheria: The Homeric island, which was settled by the Phaeceans, descendants of Nausithos, offspring of Poseidon, when they deserted their former homeland Hyperia

Korkyra: Derives from the word which comes from the Doric dialect spoken by the island’s inhabitants in antiquity. During the Middle Ages, it was known variously as Koryfo, Koryfi, Korfi, Korfoi and Corfu, probably named after the two fortified peaks of the mediaeval town. It is by the last of these names that the island is known today outside Greece.

Narrow paved little roads aside Venetian buildings, with a French and British influence, motive for the visitors. History, Civilization and Tradition are presented in a number of Museums and Galleries. Corfu never was conquered from the Ottomans and so its civilization is entwined with Venice and England.

The Old Town of Corfu. A monument that belongs in the list of UNESCO since 2007. Narrow little roads, the Kadunas, as they are named, tall, two-story buildings with brick roofs, old churches with hagiographies of great matter, as well as many Museums, gain the interest of those who choose the Old Town for their strolls. The Old Town of Corfu, in some way is “delimited” from the two fortresses: The Old and the New Fortress were built from the Venetians in 1570.

The square Spianada is considered the largest square in all of Greece. It is located opposite the Old Fortress and is surrounded by impressive buildings, such as the English Palace and the Liston.

Liston. It is the most famous sidewalk of Corfu and centers the city life for hundreds of years. The old mansions that form big arches, apses on their ground floor are their trademarks.

The Kremasti square with its elaborate rock well. Here there are many restaurants that will offer you the traditional delicacies of the local cuisine, whilst you can ever enjoy the traditional drinks of Corfu.

Kampielo is the oldest district with its very narrow alleys.

The oldest building in Corfu is located at 18 Filellinon Street and dates back to 1497.

The Town Hall. It is impressive and is located in one of the town squares that form the narrow Kadunas.

The Catholic Metropolis of San Giacomo is one of the most beautiful architectural creations that anyone can meet in the Kadunas of Corfu. It was built during the 16th century.

Aghios Ioannis and “Notre foreign” accommodate many religious relics from the Greatest Artists of Corfu.

The church of Aghios Spyridonas, the protector of the island. Is considered one of the most significant Byzantine monuments of Corfu.

The Metropolis of Corfu is built in a triple aisled basilica rhythm and it dates back to 1577. It is one of the most beautiful churches of the Old City.

Museum of Asian Art. Today, this unique Museum includes in its collections about 15.000 objects of asian art, the Far East and India.

The Serbian Museum recites a quite unknown aspect of the Corfiot, Greek as well as the world history.

The Archaeological Museum hosts antiquities Mainly though from the archaeological site of Palaiopolis, Kassiopi and the ancient cemeteries that have been excavated.

The Byzantine Museum-Museum of Antivouniotissas. It is housed at the church of Panagia Antivouniotissas in the area of Kabielo. In the Museum there are about ninety portable icons. The exhibited icons date from the second half of the 15th century until the 19th century and are indicative of the role that Corfu played in the development of the Greek ecclesiastic iconography.

Museum of Bank notes. It is housed at the old building of the Ionian Bank. Along with the exhibits, it shows the history and method of production. Amongst the rarest exhibits of the Museum of Bank Notes a Chinese bank note dating back to 1.300 A.D., one of the oldest in the world.

Palaiopolis-Mon Repos Museum. A palace that was built from the English commissioner in 1830 when the island was under under British sovereignty. Today it also houses the Museum of Palaiopolis. Aspects of the history of the building and the ancient monuments in the surrounding area are presentend through authentic objects and visual aids.

Museum of Solomos. It is the house of our great national poet, at the 3rd byway of Arseniou str. In Mouragia.

The “Ioannis Kapodistrias” Museum. It is located near the Evropouli village, 3km from the city. The exhibits are personal items of the Governor.

Municipal Art Gallery. It is housed in the palace of Saints Michael and George. It contains some of the greatest paintings of the Ionian painters of the 19th century as well as engraving and sculpture works.

Reading Society. The Reading Society building has more than 10.000 volumes of the Ionian Bibliography, as well as a rich General Library.

The Ionian Parliament is located at the crossings of Moustoksidi and Zabeli streets, with exhibits from the  fights for the freedom of the Ionian Islands.

Achilleion. The Achilleion mansion that was built in 1890 from Queen Elizabeth of Austria-Hungary, today is a Museum and  historical site.

Museum of Folk costumes. In the mountain village of Pelakas, there is a great private collection of folk costumes mainly of the 19th century.

The Neratzihas Tower is located behind the present cemetery and is the only part of the ancient wall at a height of 6 metres of the 4th century B.C. which survives.

The teple of Artemis Gorgon is situated in the boundaries of Palaiopoli. The teple is of Doric style of the 6th century B.C and some parts of it have been saved, including the altar and the huge pediment of the Temple which is kept in the Archaeological Museum of Corfu.

The Temple of Apollo in Kardaki is a temple of Doric style, is located in the Mon Repo Estate.

The Menekratis Monument is located in the area of Garitsa. The most impressive part of the monument is the archaic inscription of 10 verses, the oldest inscription found in Greek area, which is read upside down.

The Old Harbour that is located in of the Spianada square and reaches up to Garitsa.

Kanoni. An area after Mon Repo, with a nice view to the lagoon and the southern part of Corfu.

The Vlacherna Monastery and the Pontikonissi, located below the area of Kanoni, is the most typical landscape of Corfu.

Pelekas. The village with magnificent views and the most beautiful sunset watching the sun sinking into the Adriatic Sea is 13 km from the city. 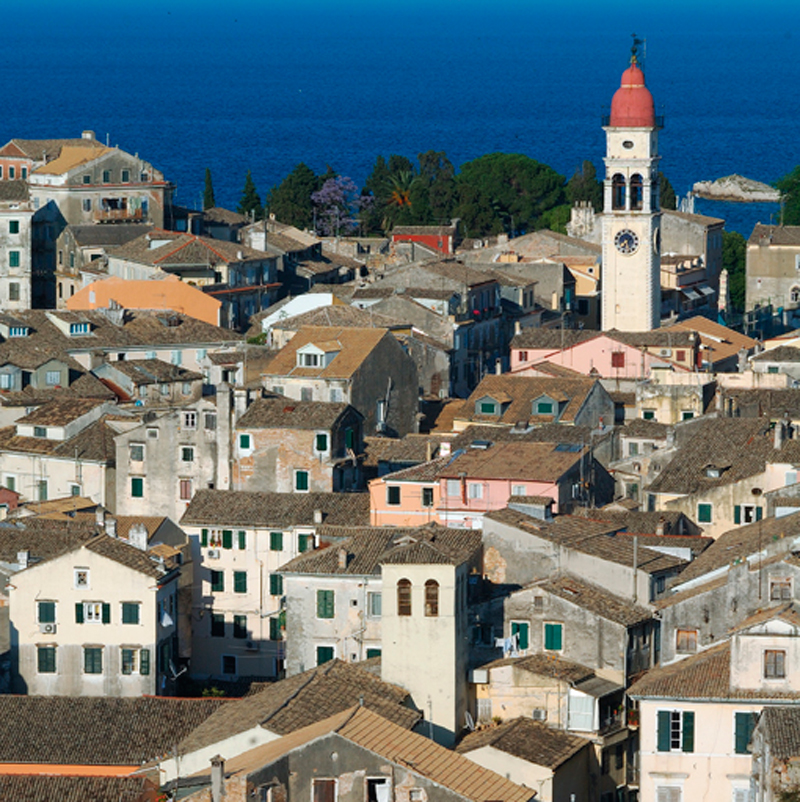 Cultural Events in the Municipality of Corfu (Summer 2020) 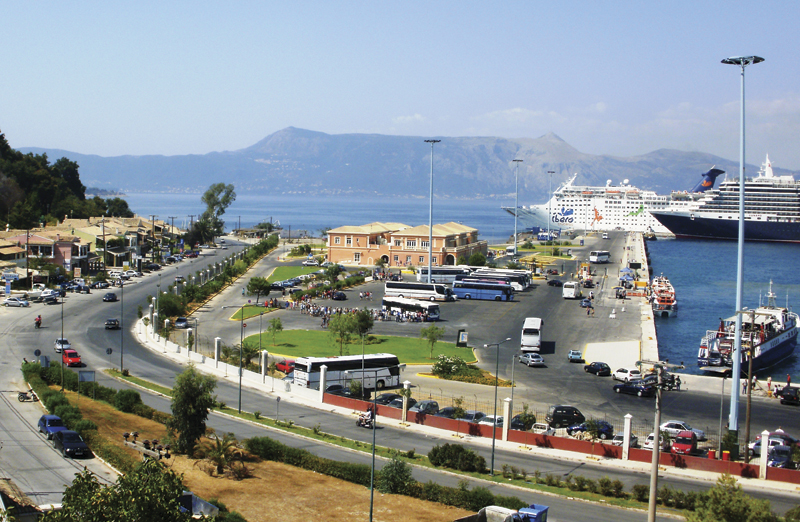 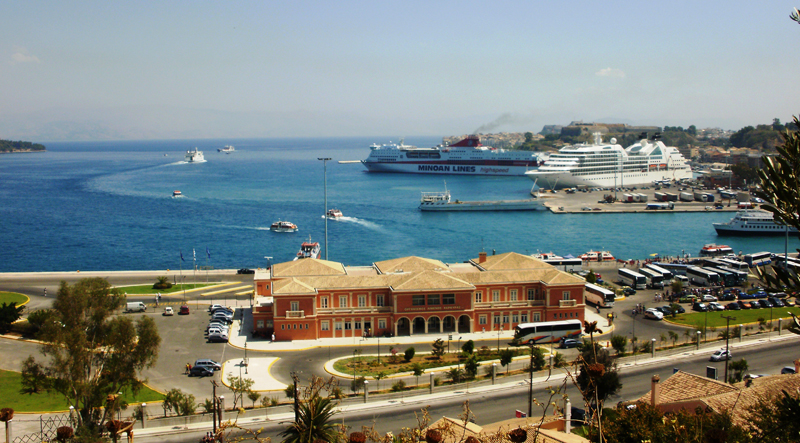 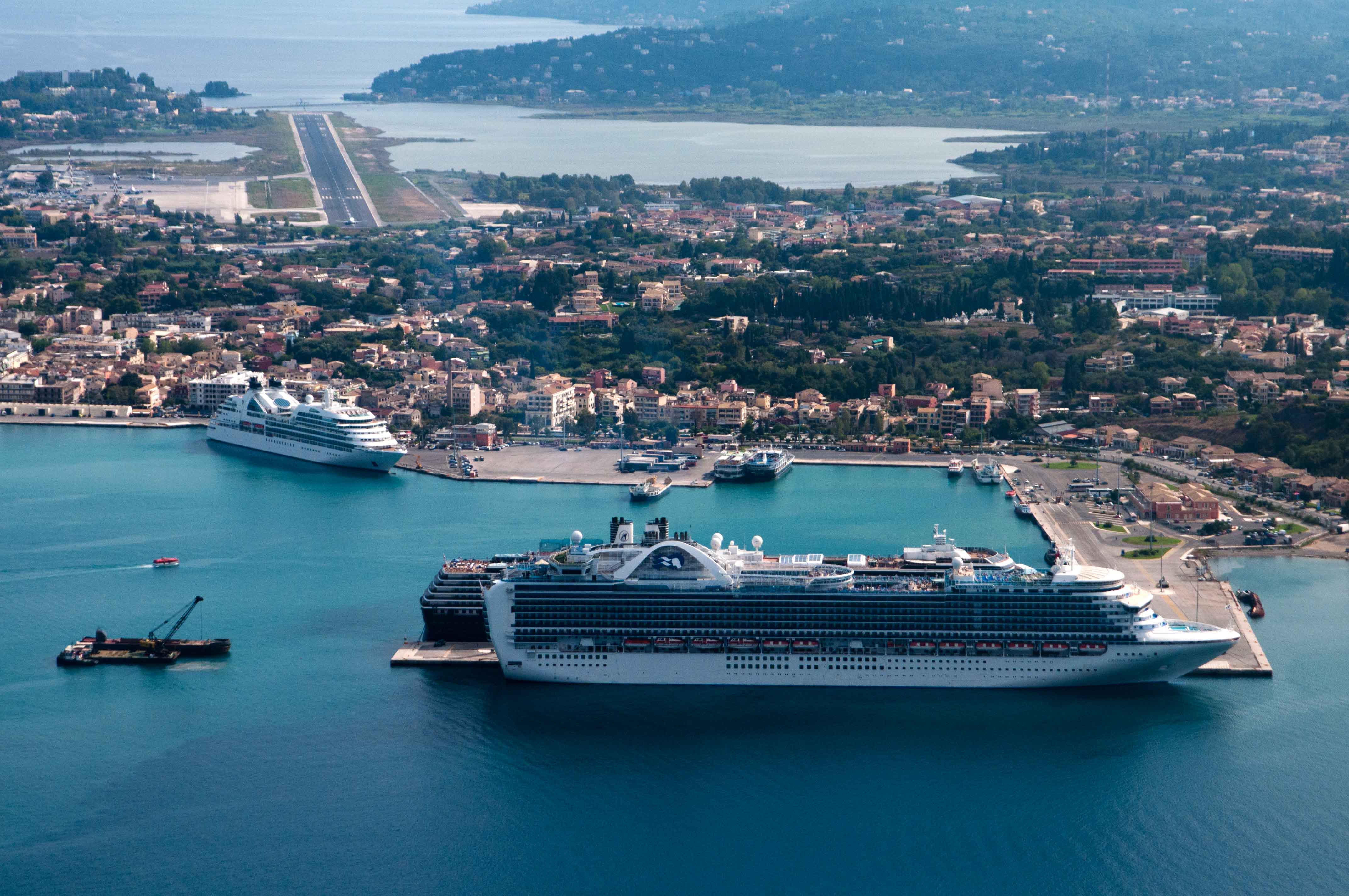 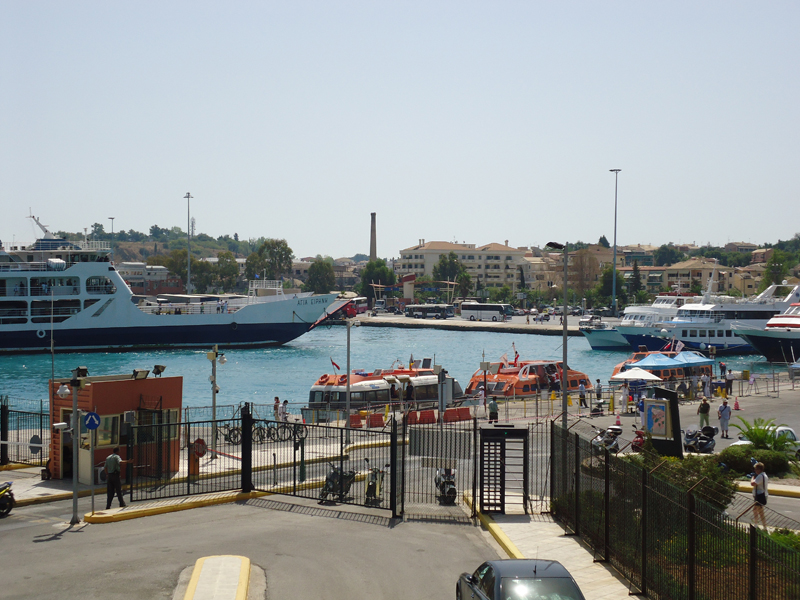 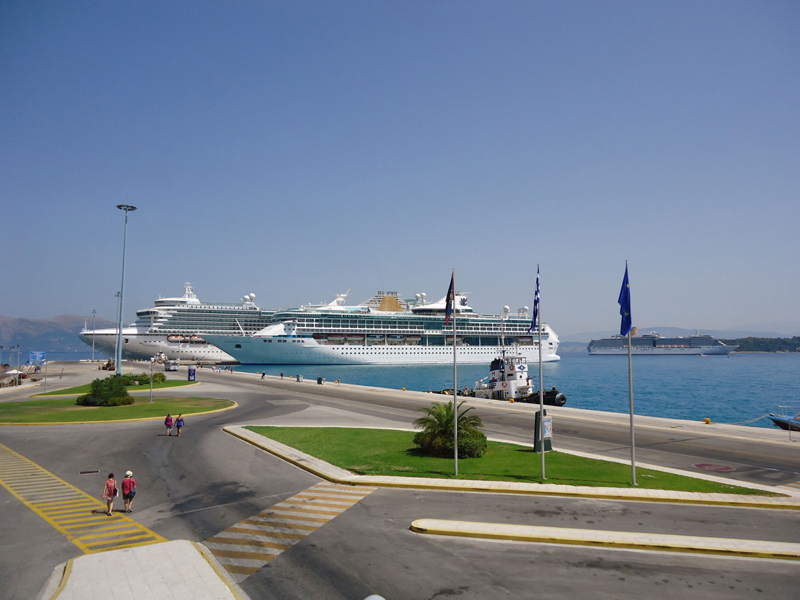 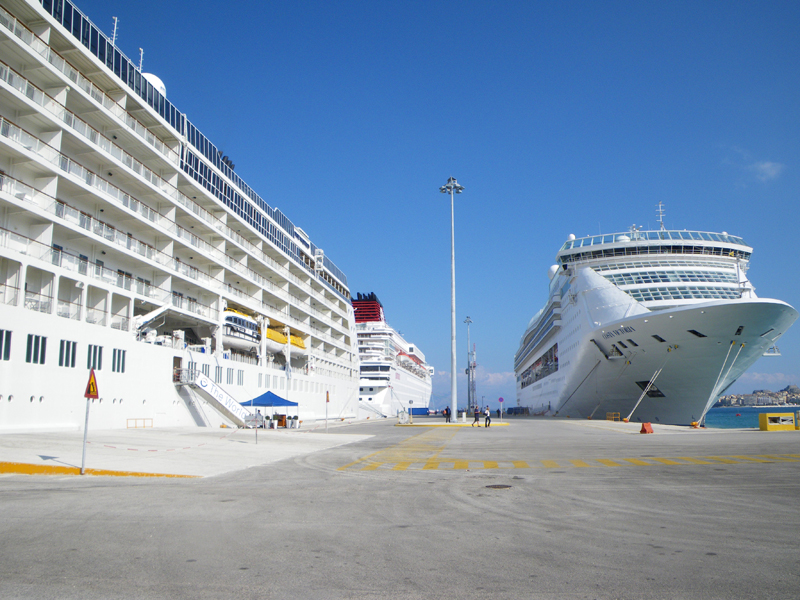 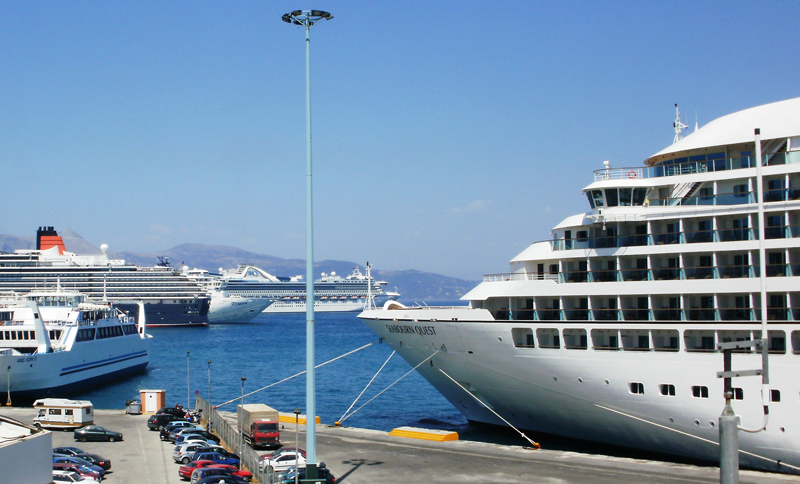