Santorini is located in Cyclades, south of Ios Island and west of Anafi Island. It belongs in a cluster of the islands Thira, Thirassia, Aspronisi, Palia Kameni and Nea Kameni.

Islands of Thira, Thirassia and Aspronisi are remnants of the prehistoric round island. They are surrounded by a deep sea basin, in the center of which emerged Palia and Nea Kameni, where the volcanic crater is located. This basin is called the Caldera or ‘’Caldera’’, according to international geological terminology.

The name Thira comes from the ancient Spartan Thira who first colonized the island and founded the homonymous city around the 10th century BC. The island has been inhabited since the 3rd millennium BC. Recent excavations in the southern part of the island in the settlement of Akrotiri have brought to light a city with a culture similar to the Minoan with particular local Cycladic elements.

Santorini is one of the few places in the world where architectural ensembles of hollow houses are preserved on volcanic soil.

Cruise guests can start their tour of Fira, the capital of the island.

Fira. They are located on the west side of the island, on the rocks of ‘’caldera’’ just opposite the volcano. Modern Fira is the cultural and commercial center of Santorini. In addition to museums, galleries and cultural events, Fira offers many options for dining, nightlife, shopping and entertainment.

Imerovigli. It is located about 3 km from Fira, on the road to Oia, at the highest point of the caldera. It was the island's capital until the end of the 18th century. The modern settlement overlooks the impressive volcano about 300 meters above sea level. It is also worth visiting, in addition to strolling down the cliff with the excavations, to walk on the peculiar "maze" that forms the winding, narrow streets of the village, with its beautiful houses and old mansions.

Oia. It is the second most important settlement of Santorini. It is located on the north side of the island 11 km from Fira. It is considered as one of the most picturesque places in Greece with a strong traditional character. It is world known for its sunset and the magnificent view of the caldera, Thirasia Island and the sea. The traditional settlement of Oia preserves the local architecture unchanged. The white houses and the blue domes of the churches are the trademark of the village.

Pyrgos. It is located 10 km from Fira at the highest point of the island. It strongly preserves the characteristics of the old medieval settlement.

Palia Kameni. It is a small volcanic island in the center of the caldera of Santorini, created by the volcanic eruption between 46 - 47 AD. Along its coast there are many hot springs where visitors can swim.

Nea Kameni. It is today the larger of the two volcanic islands of Santorini. It was created by the volcanic eruption of 1570. It is the newest land in the Eastern Mediterranean and is accessible to anyone who wishes to walk on its warm surface and reach the crater of the volcano from which the vapors come out.

Nea and Palia Kameni are part of the NATURA 2000 protected area network.

Prehistoric Thera Museum is Located in Fira. The museum exhibits findings from excavations in the area of Akrotiri that relate to the period of the island's great prosperity in the 17th century BC.

Archaeological Museum is located in Fira. It houses collections of sculptures and inscriptions from the Archaic to the Roman period as well as pottery until the Hellenistic period.

Gizi Megaron, Cultural Center is located in Fira, it is housed in a 17th century mansion. Engraving collections and paintings on Santorini are on display.

Marine Museum is located in Oia, it is housed in a 19th century mansion. It includes all sorts of exhibits related to the history of shipping on the island mainly during the 19th century.

Art Space, Art Callery is located in the village of Exo Gonia, it is housed in an old winery. The site hosts works by Major Greek and foreign artists.

Akrotiri. It is located on the southwestern tip of the island of Santorini. It was one of the most important Aegean cities in the prehistoric period. It has been inhabited since the 3rd millennium BC. Findings in the archaeological site indicate that it maintained close relations with Minoan Crete but also trading with Mainland Greece, the Dodecanese, Cyprus, Syria and Egypt.

Ancient Thera. It is located on Mesa Vouno hill, 7,5 km from Fira. It was founded by Dorian colonists in the 8th century BC and until the end of antiquity was the urban, administrative and religious center of the city-state of Thira.

It is estimated that 600 churches and country churches were built on the island most of them after the 1956 earthquake. Most of them are characterized by folk architecture of a unique style. Big all-white surfaces in the form of cubes, parallelograms, octagonal prisms, spheres, and cylinders dominate. There are no architectural ornaments, while openings are few and small. However, there are also several big churches built in the end of the 19th century. They are based on Byzantine and Classical Greek architectural standards.

Church of Panagia Episkopi. Located in the village of Mesa Gonia, it was built in the 11th century. It is one of the most important Byzantine monuments.

Agios Ioannis the Baptist Catholic Cathedral is located in Fira. A trademark of the temple which is built in the Baroque style is its bell tower and clock.

The Church of Panagia Sergena is carved into volcanic rock and it is near the village of Vothonas.

Monastery of Profitis Ilias is located in the village of Pyrgos on the top of the mountain and was built in the 17th century. Its facade with the large stone wall is reminiscent of a fortress.

Monastery of Agios Nicholas is located between Imerovigli and Firostefani in the 16th century. Visitors can admire the wood-carved iconostasis and the icon of St. Nicholas from the Byzantine years. 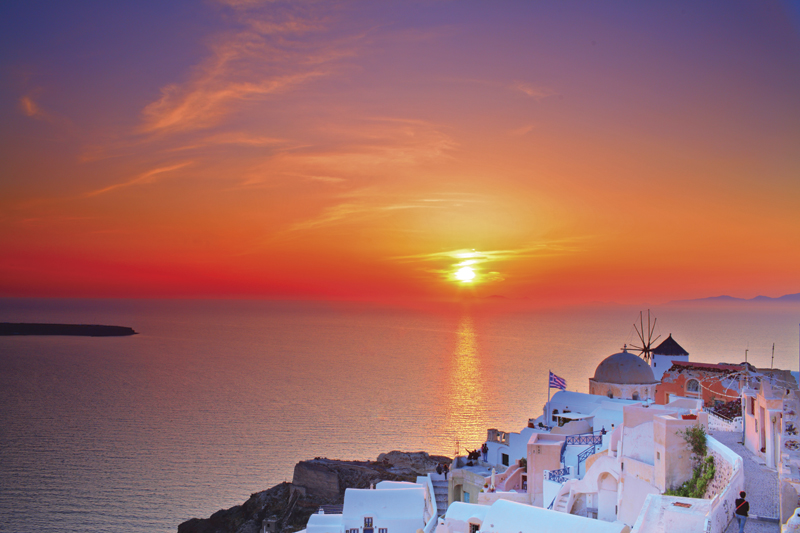 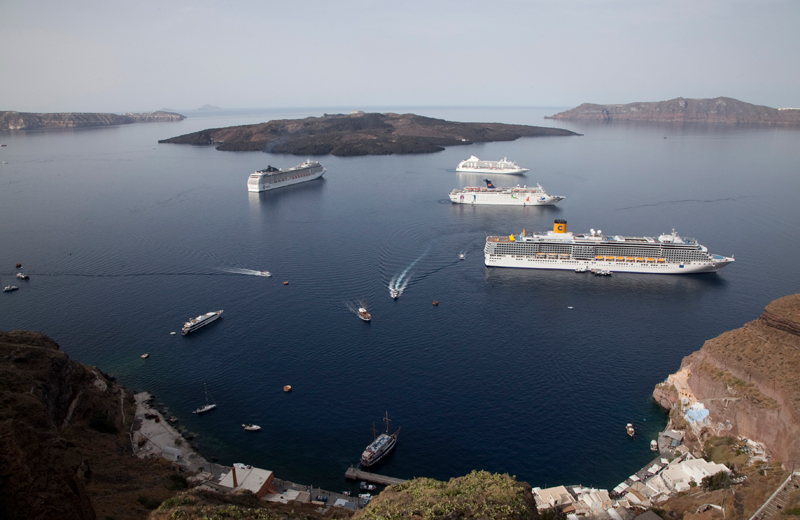 Cultural Events in the Municipality of Thiras (Summer 2020) 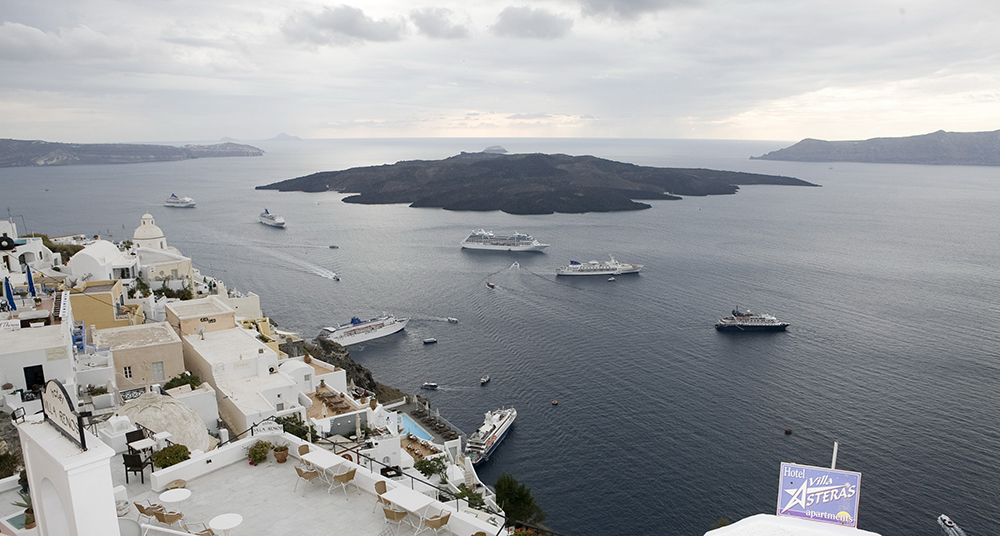 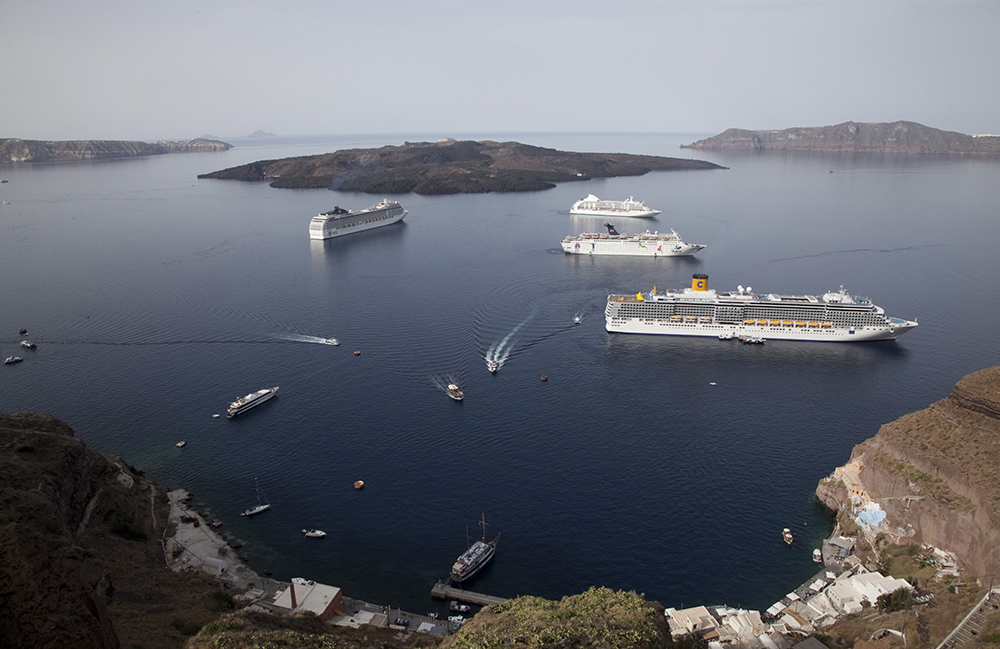 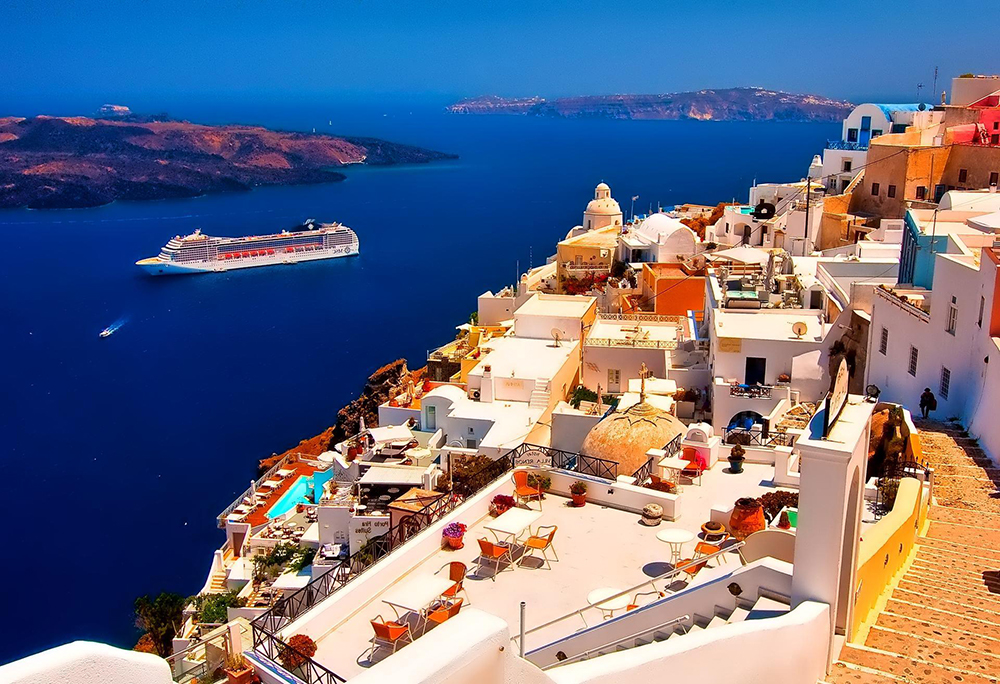 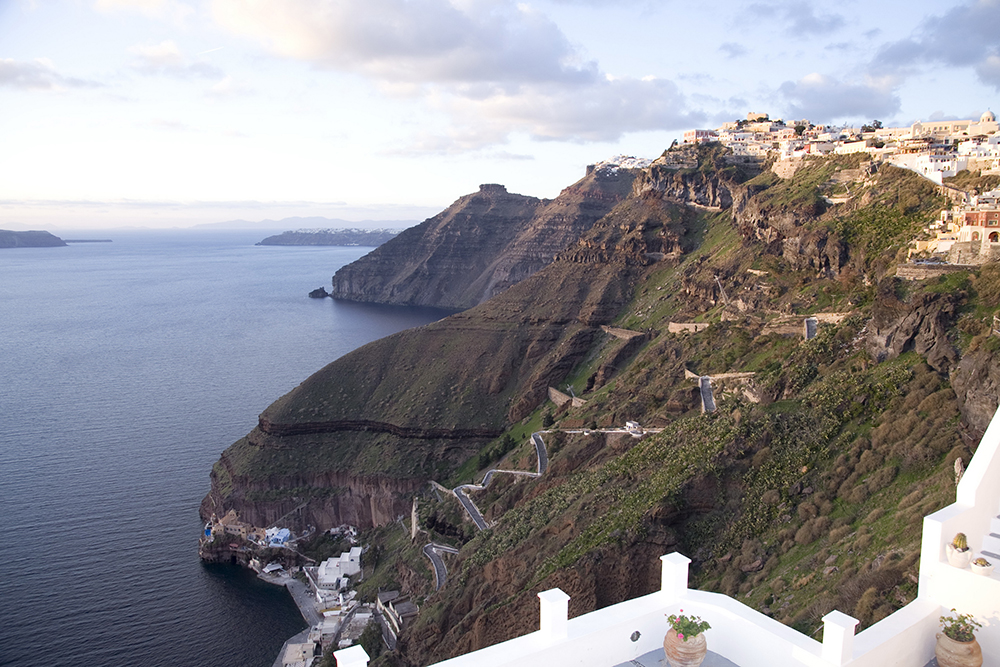 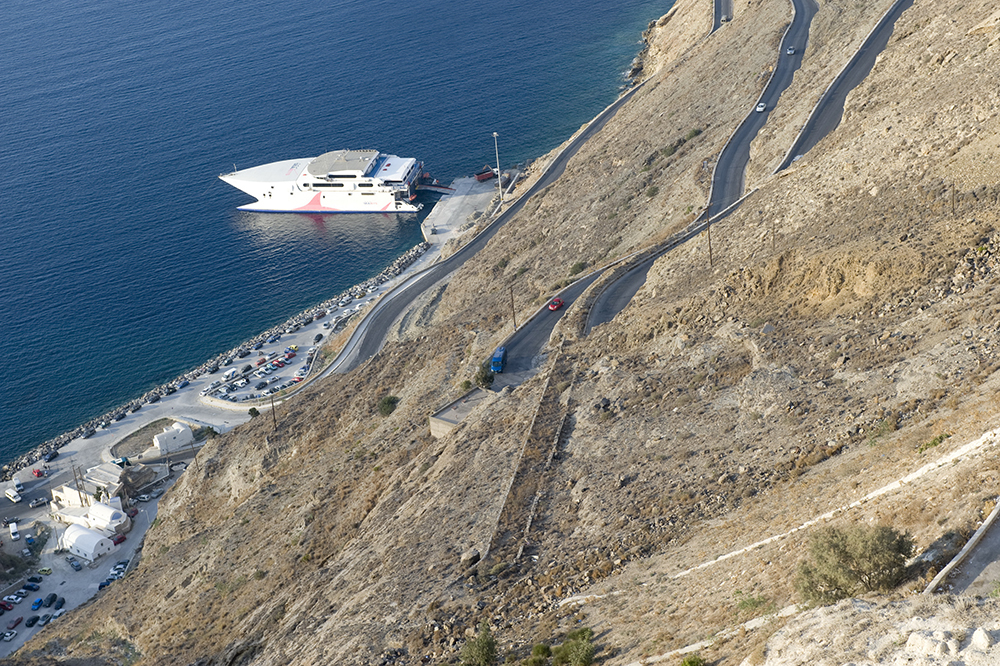 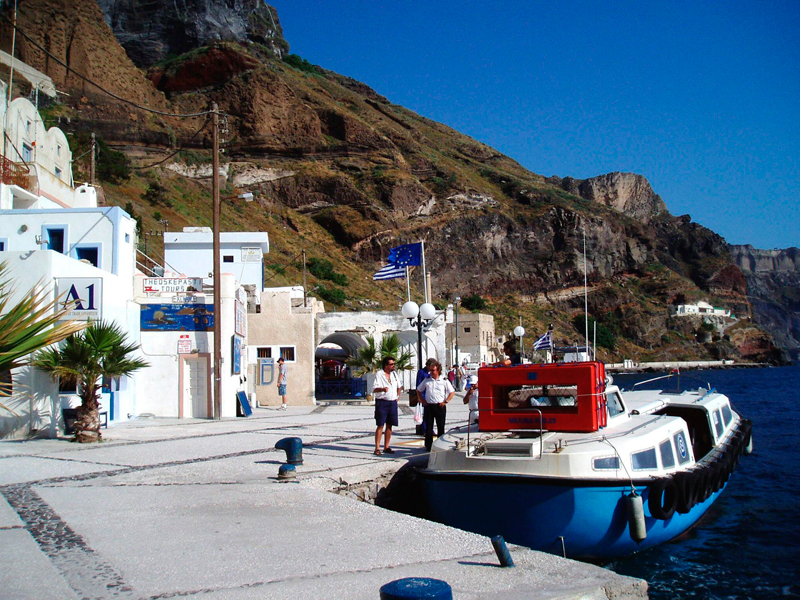 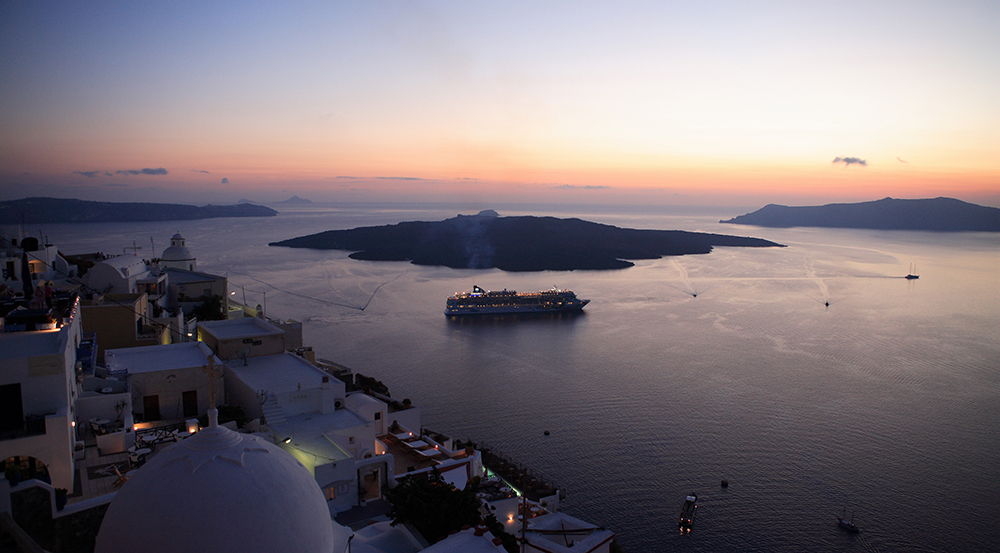 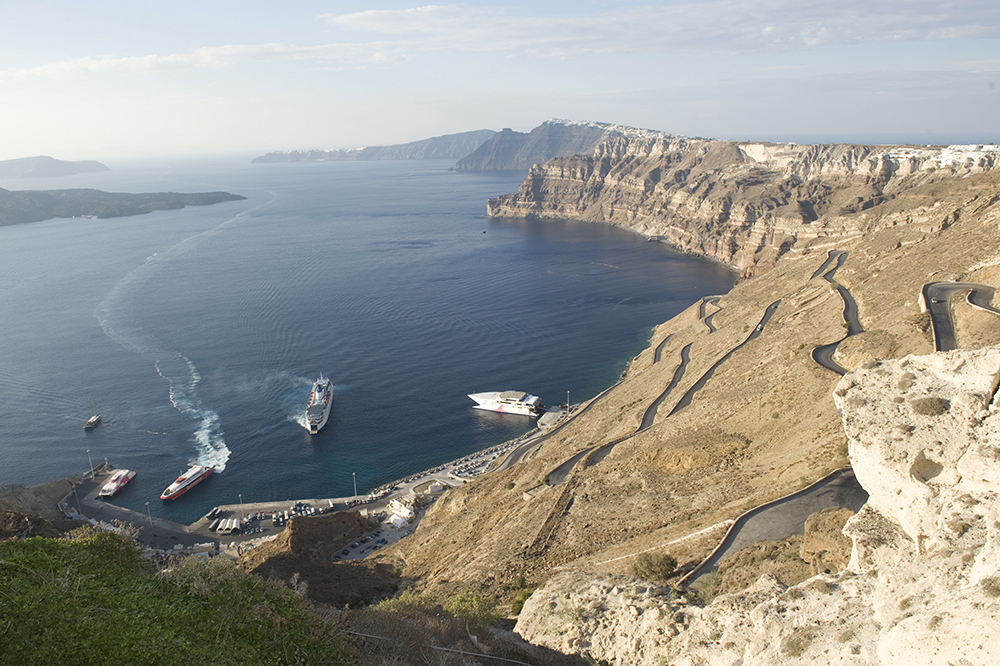 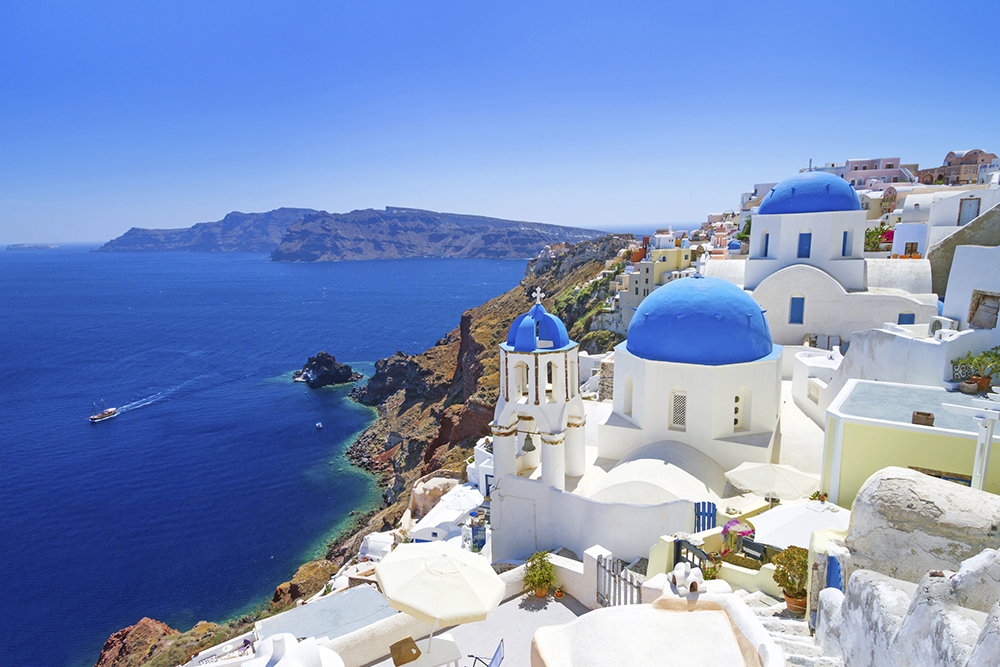 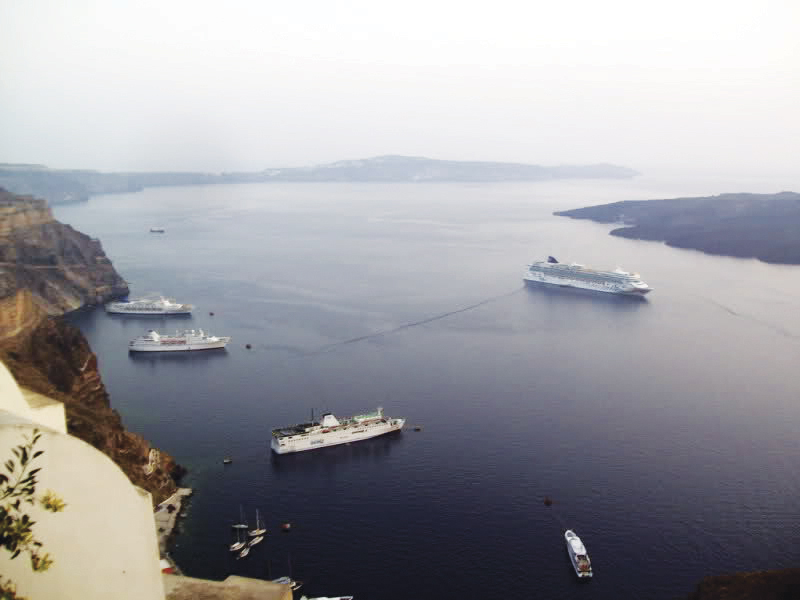 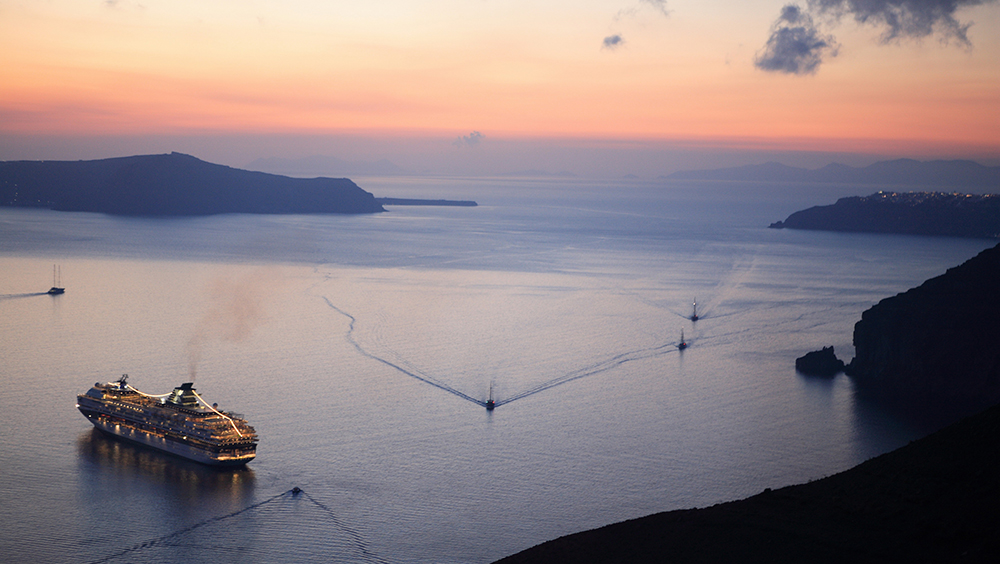